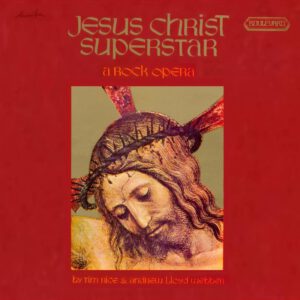 Unfortunately, this album is out of print. Some copies may still be found through such sources as eBay or Discogs.

* indicates that listening suggests Colin Dyall actually sang this role; however, a Spanish release gave an alternate name in its liner notes (which has no other credits elsewhere, suggesting this is merely an alias), so this had to be addressed.

** indicates that listening suggests Mick Tulk actually sang this role; however, a Spanish release gave an alternate name in its liner notes, so this had to be addressed.

Side 2:
This Jesus Must Die
Everything’s Alright
King Herod’s Song
Judas’ Death
I Don’t Know How To Love Him
Superstar / Crucifixion

This recording is noteworthy for a number of reasons. First, owing possibly to an earlier release date than has been previously noted in past discographies (on which JCS Zone’s was based, though research on Discogs has turned up possible earlier releases), this album boasts some of the longest — and most defensive, if passive-aggressive — liner notes this historian has ever seen on a “knock-off” recording, starting with ass-kissing bios for Rice and Webber, and moving into a philosophical treatise whining about not being allowed to print the lyrics on the sleeve for copyright reasons with the most astounding bullshit-logic argument outside of kids imploring that their parents “let me be me.” They are printed in their entirety below.

TIM RICE (left) and ANDREW LLOYD WEBBER (right) are a team to conjure with. For they have created a Messiah for today. Lovers of music in its classical origins — our Golden Age of the musical art form — may be horrified by this thought. But it is truth — today’s truth. The essence of a classic is that it endures. We, at Saga Records, are satisfied that Jesus Christ, Superstar, will endure. Americans have bought 2 million copies to date (May 1971) at 5 pounds a set of records.

Their previous 2-man oratorio — Joseph — became a “classic” sub rosa. Never issued as a record, not given a Broadway or West End introduction, it was “found” — a sort of treasure trove — by countless choral, dramatic, and school and university Societies, plus numerous pop groups. They wrote it in 1968. It is now being recorded and acclaimed. Its full title is Joseph and the Amazing Technicolour Dreamcoat.

Tim Rice is the Word Man. Andrew Lloyd Webber is the Music Man. They were not born to greatness. They have had no greatness thrust upon them. They have achieved it. Tim was born in Buckinghamshire in 1944; Andrew in London in 1948.

Jesus, our saviour was a hippy.

Perhaps this is the first time that an Opera or Oratorio has ever been issued on disc without the printed text because of the publishers’ refusal to permit a recording company to print the text, despite our offer to pay any reasonable literary royalty.

Many interesting features arise. Firstly, to blow loud and hard upon the trumpets of two brilliant young men — Colin Dyall, our producer, and Richard Charles, our sound engineer, — unlike some versions of operatic work on record our recording requires no oratorio because every word is audible and distinguishable and the text is, therefore, manifest from the recording itself.

The greatness of the work contained upon this record has been dealt with (in part) in the biographical notes of its author and its composer and even this too is worthy of an explanatory note.

Originally we were informed that we would not even be permitted to print photographs of the author and the composer. But that was a minor novelty compared to the greater ones yet to be disclosed. The notion that Tim Rice and Andrew Lloyd Webber were already public figures whereby their faces fell within the public domain had presumably not occurred to those who “warned us off”, so to say.

The major novelty resides within the fact that the Bible in England is copyright. Not so in America; not so elsewhere in the world to our knowledge. But England has so much which makes it distinguished. Where else in the world is a Monarchy to be found whose incumbent for the Time Being is the Defender of the Faith? Copyright of literary works extends for 50 years after the author’s death. But the Crown copyright in the authorized King James’ version extends in perpetuity.

All copyright owners of literary works own all rights respecting abridgement and adaptation. We wonder if Tim Rice wrote the Queen or the appropriate department of the Palace to request such rights of adaptation not only with respect to Jesus Christ Superstar an adaptation for today (and tomorrow?) of the Trial of Jesus and the Passion, but also for his earlier work with Joseph. If he failed to do so was he in breach of a Crown copyright? We have taken the precaution of obeying the Superstar Super-Right of the publishers — Leeds Music — which prohibits us from setting up in print the oratorio.

Was Jesus a hippy? By the standards of His own day — the long-hair who came not to destroy but to change — He started His revolutionary life as a hippy, tout seul; but once His disciples were around Him and His following substantial, Jesus became more than a Man, more than the Son of God; He became a Movement.

He was a Jew who believed that God was One, Eternal, Ubiquitous, Omniscient, Universal. He was the God of all men and the Creator of all things.

Jesus, likewise, liked not the Society of His own day and in His castigations of it brought upon Himself a most powerful dramatic finis to a life which, to those of use who have faith, was only The Beginning.

This message, this faith, is what Jesus Christ-Superstar is all about; but there could be no more unjust assessment of it to think of it as for hippies only. For it is the New Testament renewed.

It is for all of us.

Classic hornswoggling if ever there was. (I wish I could hire whoever that guy was to write liner notes for my work.)

This album is also noteworthy for containing the most… let’s call it confusing… version of “King Herod’s Song” ever recorded. Apparently attempting to skirt copyright (as the defensive liners would suggest) and having noticed that some of the words of “Gethsemane” scan to the melody of “King Herod’s Song” if one tries (though why one would, I have no idea), the arrangers of this album came up with a strange lyrical hybrid of “King Herod’s Song” and “Gethsemane” which they proceeded to record under the former title, with no differentiation of character in the solos and no further explanation. It’s an interesting smooth soul (bordering on light reggae) treatment of the “Herod” melody, but the lyrics clash jarringly with each other and with the arrangement. It’s worth hearing, if only to stand in awe of this incredibly silly choice.