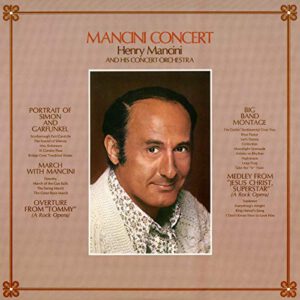 Credited to Henry Mancini and His Concert Orchestra

What can one say about Henry Mancini that has not already been said much better by great experts and enthusiasts alike in his field? Composer, conductor, arranger, pianist, flautist, often cited as one of the greatest composers in film history… one does not simply win four Oscars, twenty Grammys (plus a posthumous Lifetime Achievement Award from same), and a Golden Globe without the kind of talent that spawns “The Pink Panther Theme” and “Moon River” from Breakfast at Tiffany’s. At this moment in his journey, we catch him chasing relevance. As the liner notes make plain, two of his best-selling records at the time were concert albums, and realizing that big band themes of the 1930’s and ’40’s were no longer paying the bills on their own, he decided to add ’70’s rock opera to the mix for his 1971 concert tour of America, in the form of a JCS medley and the overture from Tommy, along with what the liners’ author aptly called “highly individual” takes on Simon and Garfunkel tunes. (Funnily enough, considering the title of the album and its status as a merchandising tie-in, it’s somewhat surprising to note that this album is not a live recording, but a studio rendition of his set from this tour.)

While the contemporary material is inventively arranged (the Simon and Garfunkel section sounds particularly heartfelt for an orchestral rendering), the real stand-outs come when Mancini is playing in his own sandbox, looking back to his swing era roots in “Big Band Montage” and weaving together a medley of his Peter Gunn and Great Race themes in “March With Mancini.”

Bottom line: if you like this kind of jazz, you’ll like Mancini’s take on Lloyd Webber, but by the same token you’ll probably find it difficult to consider any of his output bad. Having said that, his own fans — though of course one cannot account for individual taste in music outside of his typical oeuvre — rank it everywhere on the scale from “excellent and highly recommended” to “poor, with some listenable tracks.”  For JCS fans, the quality ultimately lies in the listener’s ear.