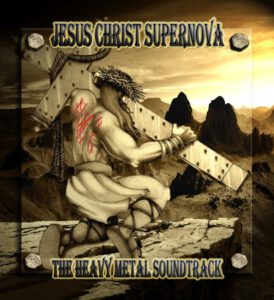 Act 1:
Overture
Heaven On Their Minds
What’s The Buzz
Strange Thing, Mystifying
Then We Are Decided
Everything’s Alright
This Jesus Must Die
Hosanna
Simon Zealotes
Poor Jerusalem
Pilate’s Dream
The Temple
Everything’s Alright (Reprise)
I Don’t Know How To Love Him
Damned For All Time / Blood Money

Anyone who has followed Jesus Christ Superstar over the years knows that the album, show, and film have never really gone out of style; they’ve merely been appreciated in different ways. At the end of the 20th century and into the 21st, this has begun to manifest itself in audio form in a series of tributes to JCS, including Daemon Records’ A Resurrection, This Jesus Must Die, Jesus Christ Surferstar, the Ultrasonic Rock Orchestra’s updated riff on the concept album, and this effort, Jesus Christ Supernova.

Co-producer Gerard K. Gonsalves initially conceived the idea of recreating JCS in a heavy metal vein, and his vision rapidly grew into that of a recording which would showcase all of the heavy metal talent (both vocalists and musicians) in his native Hawaii. His liner notes boast that “everyone on this project is either from Hawai’i, played music in Hawai’i back in the day, plays music in Hawai’i now, or has lived in Hawai’i at one time or another. Everyone did it for free, for the love of the music, and to create something incredible.” It ultimately resulted in a yearlong project, the licensing and initial distribution of which was funded on Indiegogo. (It also bears noting, though the album saw release in 2013, that it’s not the end of the line for Jesus Christ Supernova. As of a couple years ago, mainland concerns showed interest in distributing the recording on a wider basis, pending remixing, remastering, and re-tracking; on the new version, Sandy “Storm” Essman will be essaying the part of Mary due to the original vocalist’s unavailability, and the drums will have an entirely new sound as well owing to the new mix. This reviewer looks forward to the new version, partly in hope that maybe some of what is addressed below might be given a second look the next time around.)

With all studio cast recordings, it’s generally the opinion of this particular fan that since the performers lack the experience of getting on a stage and actually performing the show in front of an audience, the performances are pleasant enough, but not always up to par with a real cast album. This is something else again. Supernova‘s tagline, “The Heavy Metal Soundtrack,” leaves no illusion about what the listener will be in for. On the one hand, this reworking of the JCS score has moments where it is imaginative, daring, and refreshing; vocalists in this genre typically show the same searing intensity in their work that the original casts of JCS often did, and the guys playing Jesus and Judas certainly bring the intensity. Pilate and Simon also turn in noteworthy performances. On the other hand, while, given the mood of the story, metal’s generally dark and ominous sound would seem to be an ideal fit (moments like the end of “Peter’s Denial,” “King Herod’s Song” entirely losing the whimsical comic-relief aspect for the better, or the guitars used in the motif at the end of “Judas’ Death” come to mind; the latter in particular is absolutely incredible and done very atypically), and the intent and structure of the original are basically retained, there are moments when the relentless metal arrangements fall flat and sound too similar, starting to wear on the listener. Moments like “Everything’s Alright,” “I Don’t Know How To Love Him,” and “Gethsemane” don’t land because they feel disjointed and emotionless; peaceful moments and gentler arrangements are necessary to break up all the monotonous, exhausting hard rock and draw key dramatic distinctions between the characters. If a ballad was written to be a ballad, it should sound like one. Flaws aside, it’s a fine album, if not quite this reviewer’s cup of tea owing to the single-minded approach to the arrangements.

Before I close, a word to the more nitpicky fans among us: it’s important to remember that it’s easy to spot mistakes, blips, and bum notes in recordings like these, but to focus entirely on those is to miss the point rather than to judge objectively. It was a labor of love, and for that alone, it stands as a worthy entry in the catalogue.