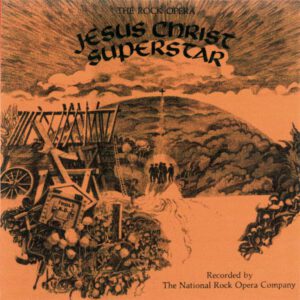 The above singers sing the parts of apostles, priests, soldiers, merchants, etc. Street crowd sounds were produced by the entire chorus plus Sandi B. Lewis and Janet R. Hascal.

“Take My Mother Home” was chosen by Musical Director David Chase as a replacement for “John 19:41” an instrumental, and the concluding selection in the original album. It was Mr. Chase’s opinion that so doing enhanced this recording. Writer: Hal (sic) Johnson. Published by Carl Fischer, Inc.

Side 1:
What’s The Buzz
Strange Thing, Mystifying
Everything’s Alright
Poor Jerusalem
I Don’t Know How To Love Him

The illustration on the front cover was created by Derek Grinnell. The artist has projected the execution of Christ into contemporary times to follow the feeling of the album.

In the latter category stand the makers of this recording, The National Rock Opera Company. The fact that the opera seemed never to have been designed for live performance (to the untrained ear, the original concept recording suggested vocal parts too demanding to be done several times a week) did not stop this “bootleg” company from going on the road. Initially, they did not have permission from the publishers to use the material (which is more likely the reason for the inclusion of the non-JCS finale “Take My Mother Home” — such unauthorized touring versions would frequently incorporate other material of a religious nature, sometimes original, to claim they weren’t profiting from brand recognition), but a timely court order in their favor allowed them to proceed.

Which they did, with swiftness — at least one leg of the tour played over 120 performances in 26 states in less than 6 months (running from July through December 1971). To hear the tour’s sound and lighting technician Michael “Zorba” Kontras tell it, “Our touring schedule was a grind. We averaged 5 shows a week with most of them being one-nighters.” However, as the time-worn axiom puts it, the grind produces results, and it certainly did for Dorian Harewood (Judas), who went on to massive success as an actor in such hits as Full Metal Jacket, I’ll Fly Away, The Jesse Owens Story, Roots: The Next Generations, Strike Force (with Robert Stack), and Viper. The tour would continue into Europe with cast changes along the way before closing up shop following its Holland run.

Early in the tour, running wild with ambition, the company decided they needed a product of their own that could be sold at the shows. One 12-hour night at Jack Clement’s Recording Studios in Nashville later, they had an 80-minute double album. Exploitation breeding exploitation, the company further struck an agreement with the recording’s producers, Merv Shiner and Tony Moon, to market highlights from the album as a separate “knock-off” recording credited to “The Brown County Chorale and Country Music Ensemble” (needless to say, a fictitious group). About half of the original tracks were excerpted and given country-style overdubs for this release, aimed at sealing up the “Western” market for JCS.

Often, “knock-off” recordings were graced with faux-sophisticated liner notes that attempted to add an air of authenticity to the proceedings. When The NRO Company’s efforts were repackaged as The Brown County Chorale, the following (along with a synopsis that served as an informal tracklist) was an example:

Lewis was instantly overwhelmed with excitement! Here was an idea abounding with success potential, Lewis reasoned. He quickly placed a conference call to Michael Moran, George Thomas, and Julius Barry, executive officers of the company.

Lewis reasoned, pleaded, and cajoled with tremendous and captivating enthusiasm. He was finally granted the permission he sought.

Mervin Shiner and Tony Moon, two of the most successful A&R men in Nashville, were retained to produce the album for Packard. The Jack Clement Recording Studios, the most modern facility in town, was contracted for the session. Some of Nashville’s very finest studio musicians were hired for this ambitious project. An outstanding vocal choral and music emsemble (sic) was quickly flown to Nashville and what began as a simple provoking idea, just 36 hours prior, suddenly developed into the artistically electrifying sounds concealed deep within the tiny grooves of the record inserted herein.

Gotta give ’em credit for basically admitting — albeit in diplomatic terms — that it was a cash grab right there in the liner notes, huh?

Ultimately, in August 1971, most of the major pirates were put to a stop when Judge Lawrence Pierce of the US District Court in Manhattan upheld a temporary restraining order halting all unauthorized productions of JCS anywhere in the United States. But it’s interesting to listen to a memory of JCS when — even for a moment — it belonged to the people.

I love this recording because it’s raw, unpolished and very rock opera! It just feels very different from everything we’ve heard and features a cast that does their own thing and aren’t afraid to rip their lungs out while performing. This goes especially for Dane Donohue who does some of the most bizarre and yet awesome screaming I’ve heard! He doesn’t only sing well, he can also act! Dorian Harewood is also a great Judas in my opinion. Though some might say he’s doesn’t have the necessary vocal range, he makes up for it by giving everything he has in every song and it just feels real to me. Apart from that there are some really interesting arrangements and the whole album feels like an actual experience, probably because it was apparently recorded in one night!