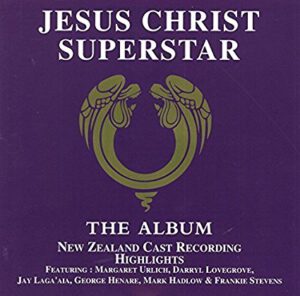 At one point or another, everybody is nostalgic for the decade in which they came of age. Every surviving member of each nostalgic decade has something to miss: music, TV shows, Saturday morning cartoons, hanging out with your friends at the skating rink or the mall, or over an egg cream at the drugstore (choose your nostalgic junket). And, on average, the big waves of nostalgia take about 15-25 years to get going.

After Harry M. Miller’s massive success with his concert revival of JCS in Australia, boasting a cast that was a veritable who’s who of Australian entertainment and the kind of ticket and album sales one can only dream of, it was small wonder that he’d repackage the lot for audiences in New Zealand as well. Joined once again by fellow entrepreneurs Garry Van Egmond and International Management Group in the producing chair, the production in New Zealand, though based on the concert event, was scaled down for conventional theaters, and the cast was less star-studded (Darryl Lovegrove would go on to create the world’s most booked corporate entertainment act The Three Waiters, and Jon Stevens’ older brother Frankie would later be most known as a judge on New Zealand Idol; only Jay Laga’aia had any real success in film or TV before the show or went on to bigger success later), but it played to similar business, and sales kicked into really high gear when Jon Stevens returned to the role of Judas opposite his brother (and Deni Hines — daughter of Marcia, who was the first black Mary Magdalene in JCS history and became a star thanks to the original Australian production — as Mary) when the production went back to the Australian mainland.

The resulting album is essentially a copy of the Australian version’s arrangements with different voices. The only noteworthy differences are a more conventional arrangement of “King Herod’s Song” (owing, no doubt, to the appropriateness of material to the different performer essaying the role) and a studio recording of “Could We Start Again Please?” (Evidently, Miller or the record label were not going to make the same mistake that had gotten the full live CD of the Australian cast shelved not long before.)

Incidentally, if the song’s placement on the CD before “King Herod’s Song” seems a little unusual, it’s not just you — as the pro-shot video of the Australian concert tour bears out, “Could We Start Again Please?” was moved from its traditional position after Herod’s scene to immediately follow “Peter’s Denial” in this production instead. While this reviewer has never been a fan of seemingly needless change when it comes to JCS, he will make an exception in this instance: the song’s intended purpose when added on Broadway in 1971 is easy to understand (Mary disappears vocally after the first half of Act II, so it’d be nice for her to get another moment in the show, and it can be argued the song eases the mood whiplash from Herod’s big comic relief number to Judas’ dramatic suicide), but some feel the song falls flat where it is placed in the score. Musicians I’ve conversed with who’ve been in the orchestra for JCS often complain that “Herod’s spot has just finished on an uptempo note, greeted by laughs and applause from the audience, and then it’s followed by a slump into this comparatively boring ballad,” and in viewing the show live many times, I concur that in its usual spot the song has often come and gone before the crowd reorients itself enough to process it. If one has made up their mind to move the song, the spot the Australian / New Zealand production picked at least helps it register, and the new placement is organic to the moment setting it up (i.e., Mary and Peter are already present, hesitant, scared, confused, wishing they could turn back the clock, instead of cutting back to them out of nowhere).

Barring those cosmetic differences, the updated arrangements by David Hirschfelder are still in place, and this reviewer still feels much the same about them as he did the first time he reviewed them. (For fuller thoughts, go read it.) With that in mind, let’s skip ahead to performances.

On the Australian recording, it was Judas who, although captivating, erred too much on the side of caution, with Jon Stevens often sounding like an Aussie Carl Anderson. On this album, it’s Jesus who can’t handle delivering a new approach in the spotlight; Darryl Lovegrove’s vocals might as well have been replaced by Ted Neeley’s from the film, considering how closely he hews to them, especially in terms of phrasing. On the brighter side of things, Jay Laga’aia is a real stand-out as Judas, with some excellent vocal ad-libs even if some of his acting choices were questionable (check out the end of “Superstar” where his voice sounds like he doesn’t see himself as a sinner, but his ad-libs suggest repentance), and it is this reviewer’s opinion that George Henare was better at Pilate than the fine-but-not-particularly-amazing John Waters.

Since the creators of this recording saw fit to recycle the arrangements (albeit with good reasons and intentions, commercially speaking), I see no problem with recycling the end of my Australian review here, which still applies in full force to the New Zealand recording:

All in all: the music of the score holds up today. Most of what you hear on this album (the overly processed vocals and some of the more dated re-arrangements, for example) does not. But this album still ranks as a worthy, indeed necessary, addition to any JCS fan’s collection.