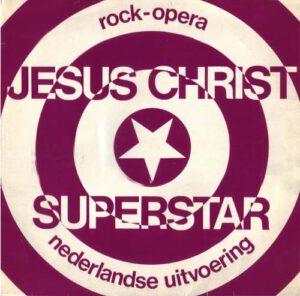 NOTE: The listings at Discogs and Cast Albums differ considerably on both the number of tracks and the titles of each selection. As Discogs actually features photos of the label and album cover substantiating their listing, we’ve opted to list both (with English equivalents in either list occasionally being assumptions, given that each list seems to indicate more than one track potentially fitting a certain title exists), assuming that a later re-release may have broken up the tracks differently, or added tracks which could not be featured on the original LP for reasons of length. If anyone knows different, please contact us!

Jesus Christ Superstar continued its march onward into the mid-Seventies, going from strength to strength and enjoying much success around the world. It came as no surprise, having reached most of earth’s other locales, that JCS eventually reached the Netherlands. Indeed, the original single of “Superstar” by Murray Head had first met with major success in the Netherlands upon its initial release, apparently becoming a major item in the gay bars and discos, who sent it rocketing to the top of the charts, leaving even the then-current Led Zeppelin and Elvis singles in its wake. (Funnily enough considering the type of establishment where the single gathered its cult-like following, Tim Rice records in his autobiography, “I was not thrilled to note on the initial pressings of the Dutch ‘Superstar’ single my name was printed as ‘Tim Arce.’”)

The first ever Dutch staging was presented by a choir from De Bilt called Michaëlkoor, which may or may not have been associated with a similarly named church in the area, accompanied by a full rock band. Contemporary press cuttings suggest that after initially announcing a live performance at the Reform Church in Nieuwkoop, the esteemed heads of that august sanctuary denied them space, forcing Michaëlkoor to move the performance to a Roman Catholic church in the area.

This staging naturally led to the first ever Dutch recording. The founder of JCS Zone, Jay, who is a native of the Netherlands himself, adds in his description of the recording on his trading list that this was apparently initially recorded for radio broadcast, and further states that the Dutch translation is quite bad, at times returning to the original English at random. Well worth the listen for the avid JCS collector, one supposes, but this reviewer would forgive you for giving it a miss.