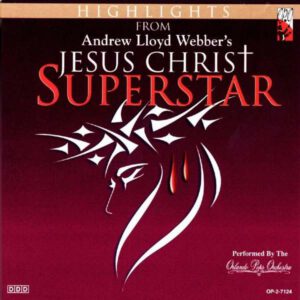 Overture
Heaven On Their Minds
Everything’s Alright
Hosanna
I Don’t Know How To Love Him
Damned For All Time
The Last Supper
Gethsemane
King Herod’s Song
Superstar
John 19:41

In this case, unfortunately, one can’t even say the performances are pleasant. The entire cast suffers from a case of over-enunciation, which doesn’t help the pronounced lisp of Ray Hatch’s Judas. The overall effect is that of rehearsed “spontaneous creativeness,” like a Mormon church choir trying a bit too hard to achieve even an approximate rock sound. As with any highlights recording, there are some good points: the arrangements, as performed by the Orlando Pops Orchestra, are alright enough, David Chernault’s Jesus is beautifully sung, and there’s also a noteworthy appearance by actor/comedian (and future MADtv, Big Gay Sketch Show, and Rerun Show cast member) Paul C. Vogt as Herod.

Other than that, the casual JCS fan would be forgiven for giving this one a miss.