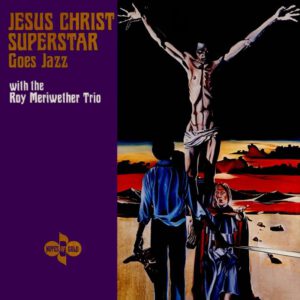 Mixed and Edited by Allen Orange

Side 1:
Jesus Christ Superstar
Everything’s Alright
What’s The Buzz
The Temple
I Don’t Know How To Love Him
Trial Before Pilate/39 Lashes
Gethsemane (I Only Want To Say)
Crucifixion

Side 2:
I Wish I Knew How It Would Feel To Be Free*
MacArthur Park*

This album brings us the Roy Meriwether Trio’s take on the proceedings. Side 1 is, obviously, the most relevant to JCS fans, consisting of a medley of jazz arrangements of the show’s score (portions of which were also released as a 7″ single in the States). No slouches in this bunch; Roy Meriwether alone — dubbed the “Bruce Lee of the piano” by fans, friends, and fellow musicians — was a self-taught virtuoso who had long been blending jazz, blues, and gospel with classical elements on the keys. A native son of Dayton, Ohio, Roy started playing the piano at age three and had composed two pieces before he was four. Instead of exploiting him as a child prodigy, Roy’s parents wisely channeled his talents into family activities, such as playing in his father’s church, accompanying the family choir, and performing with gospel singers throughout the Midwest. Roy turned professional at age eighteen and cut his first of many albums, Soup and Onions, shortly thereafter.

It’s hard to sum up this version of Webber’s score in a sentence, but if pressed, we can only repeat the words of JCS super-fan (and “knock-off” recordings aficionado) Adam Schoales: “Unlike anything else you’ll hear.”