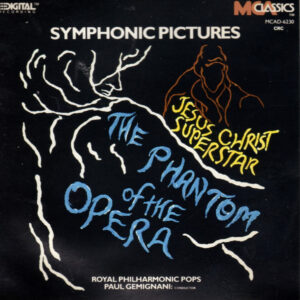 Phantom Of The Opera

Part 1
A. Prelude: Think Of Me / The Phantom Of The Opera
B. Think Of Me
C. Angel Of Music
D. Phantom (Reprise) / Point Of No Return
E. Music Of The Night

Part 2
A. Masquerade
B. Think Of Me (Reprise)
C. All I Ask Of You
D. Phantom (Reprise)
E. Wishing You Were Somehow Here Again

The “Symphonic Pictures” album seems to have been the third in a series of Royal Philharmonic compilations devoted to the magic and music of Broadway, as explored in the then-new medium of digital recording. The first volume, A Broadway Extravaganza, melded the work of Andrew Lloyd Webber with that of such storied composers as Harold Arlen, Duke Ellington, George Gershwin, Gilbert & Sullivan, Sigmund Romberg, and Stephen Sondheim; the second installment, Digital Trip Down Broadway, added themes by Leonard Bernstein, John Gay, Cole Porter, Richard Rodgers (with both Hart and Hammerstein), Jule Styne, and even a tune from Les Misérables to the stack. The general selection, as may be clear, was meant to contain enough of both old and new to satisfy any comers, but for the third volume to seemingly scrape the barrel and focus on the two most popular scores of a single composer, there could be only one explanation: either running out of material or hoping to sell better than the last two volumes.

And they had some seasoned veterans leading the proceedings — Webber should count himself lucky that luminaries like Luther Henderson (a legendary African-American composer, arranger, and conductor who’d worked extensively in classical, jazz, and on Broadway with names like Ellington and Lena Horne), to say nothing of preferred Sondheim collaborators Paul Gemignani and Thomas Z. Shepard, were tackling his material. Notwithstanding being a rack job, the label sought to cultivate the impression that the score of JCS, and for that matter, the (at the time) freshly-minted Phantom, was not “slumming it” in their hands.

Classical fans may be pleasantly surprised to discover, from the detailed opera-like liner notes (apparently by Henderson) and the powerful, sensitive arrangement, that JCS is a delightful piece of music. JCS fans may be thrilled to have a Muzak version to make visits to their grandparents more palatable. Is it to this reviewer’s taste? No. But the truth ultimately lies in the ear of the beholder.