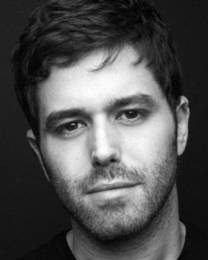 Q. When did you first hear JCS? What did you think?
A. My first encounter with JCS was via the Norman Jewison film. I have still never seen a production on stage. I must have been 13 or 14. And my exact thought was, “Holy fucking shit… this is amazing!”

Q. On that note, what’s your favorite song from the score?
A. “Gethsemane.”

Q. Your thoughts on this — 40 years on, why is JCS still performed and relevant?
A. For the same reason Christianity has been around for 2,000 years! The story is incredible, perhaps “the greatest story ever told,” and for some reason Andrew Lloyd Webber music never sounds dated… am I saying ALW is as timeless as Jesus? I don’t know… time will tell.

Q. How do you view Judas personally, and how does that factor into your portrayal?
A. My views of the real figure of Judas Iscariot and the character I play are the same. I don’t believe the hype of some of the books of the New Testament that paint Judas as Satan’s spawn or something. I’ve read all of the “lost Gospels” that I could get my hands on, including the Gospel According to Judas. Granted, all these are not firsthand accounts, as they have been carbon dated for proof, but throughout the three hundred years after Christ’s death, many other pictures of why Judas betrayed Christ rose to the surface. Some say Jesus told him to do it, as it was “God’s will,” a divine prophecy… a few of the lost gospels say that actually. One thing I know for sure… in the gospel according to Sir ALW and Tim Rice, he didn’t do it for the money. So I investigated all other reasons to justify his actions… and I’m going to keep them to myself, and let people come to their own conclusions after seeing the show!

Q. Are there any previous Judas performances that have influenced your version?
A. No. I looked at it as if it were new material and a new role.

Q. What’s the hardest scene for you to play or watch, and why?
A. “Damned for All Time” is physically hard, due to the amount of action in our blocking of the scene. I’m out of breath and still singing at the top of my lungs.

Q. You’ve played a role in another Rice-Webber piece, Che in Evita. Do you feel this role compares to that of Judas?
A. Sure. They are both heroes in my opinion, both men willing to die and kill to save their people and fight for what they believe in.

Q. What do you most want the audience to “get” out of your portrayal of the role?
A. That Judas had only the very best of intentions.

Q. Now we get to the production itself. How did you come to be involved with the Stratford production?
A. Around this time two years ago, Stratford came down to the States after not finding a Canadian Che for Evita. I was fortunate enough to be available for the audition, and the rest is history. I am really the luckiest American actor to have the opportunity to work here. I think had I known about Stratford, growing up in Philadelphia, it would have been my dream gig rather than Broadway. Anyhow, during last year’s production of Evita, I was asked to audition for Judas.

Q. What’s it like to work with Des McAnuff?
A. He is the best. He is like a man with a canvas and all the paints and brushes in the world at his disposal, with which he knows how to paint and make a masterpiece. His vision is so clear in telling this story, and yet he still lets us actors bring our own ideas to the table… I’d work with him again in a heartbeat.

Q. We’d also like to take a moment to acknowledge the tremendous audience response to the show. What was your first reaction to that?
A. Actually, my friend Adam Jacobs was in Toronto with the tour of Lion King, and I invited them all to our first preview, so the pressure was on. They loved it. The audience reaction at our curtain call was a huge relief. I was pretty sure what we had was special, but it was nice to get that audio and visual validation.

Q. From what we understand, the audience response attracted attention in some very high places indeed. What was it like to perform for Andrew Lloyd Webber and Tim Rice?
A. I didn’t know they were there!

Q. Of course, they came backstage after the show. Did either of them offer any notes on your performance or the production?
A. Nope, they both just were the nicest guys you could meet. They were so happy, as if the show was their child on graduation day.

Q. And the critics and accolades followed. How did you feel when you first heard the show was sold out for most of its run?
A. Look, I just want as many people as possible to take in this production, so I’m thrilled when we have a packed house… and we always do! We’re very fortunate.

Q. Packed houses indeed! I’m sure it came as no surprise, then, when additional performances were booked during the normal run, and then the extension was announced.
A. At first I was like, “But I wanted a day off!” But after a minute, I remembered that I love doing the show more than having free time… that’s the truth.

Q. However, with the success of the show, people must forget that it’s very hard work indeed. The role of Judas is a vocally (and apparently physically; see above) demanding part. The work is doubly hard for you because you are also in a second Stratford production (The Grapes of Wrath). How do you maintain your voice to do two totally different parts?
A. I don’t talk between shows.

Q. The hard work certainly pays off, though! What was it like when the La Jolla transfer was announced?
A. I couldn’t tell you the exact date… but a few days before it was announced to the general public. (Seems Mr. Young misunderstood the question a tad; don’t worry, he makes up for it in his next response.–ed.)

Q. When did you find out about the Broadway transfer?
A. There had been rumors flying around since Sir ALW came, but we didn’t get official word until one half hour prior to the press release.

Q. Before I go, a question that is score-related, but not necessarily show-related. You just put out your second CD, and “Heaven on Their Minds” is on it. Your album version is quite different from the one you do in the show. What influenced your arrangement of it?
A. The producer of my album knew of a great band with a very different folk-rock sound. We wanted to put HOTM on the album, but didn’t want it to be as theatrical. I didn’t want my album to be a soundtrack. So the band came to me with an idea and I liked it. However, there was one ingredient missing. I pulled in our guitarist from JCS, Kevin Ramessar, and he added that essential iconic guitar to it… I think it works. (Incidentally, this seems like a great opportunity to direct your readers to the audio portion of my site for a taste of HOTM and my new album, available on iTunes now.)

Q. Well, that about wraps it up! Thank you for talking to JCS Zone. Best wishes on the rest of the run, and we look forward to seeing you on Broadway.
A. My pleasure Andy… any time!! Message me again during the transition to Broadway; I’ll be happy to fill ya in.