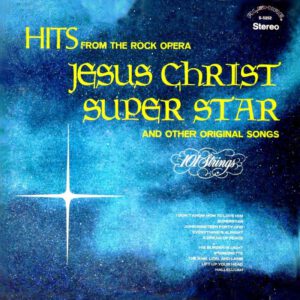 Side 1:
I Don’t Know How To Love Him
Superstar
John 19:41
Everything’s Alright

Side 2:
A Dream Of Peace*
His Burden Is Light*
Sermonette*
The Ram, Lion, And Lamb*
Lift Up Your Head*
Hallelujah*

Even budget-level classical ensembles were getting in on the act, as this recording proves. 101 Strings, looking to cash in on the trend, recorded this severely edited sampling, pairing some familiar selections with non-JCS material of a sacred nature. Not really much more to say about this one, but suffice to say that classical covers of Andrew Lloyd Webber are not to everyone’s taste. JCS super-fan (and “knock-off” recordings aficionado) Adam Schoales once opined that the recording was “damn near unlistenable,” elaborating that it “[f]eels very church friendly” and “[i]t’s clear this one was designed for parents of ‘the kids’ listening to the original rock album,” but allowing that the album boasts “some nice orchestral arrangements.”