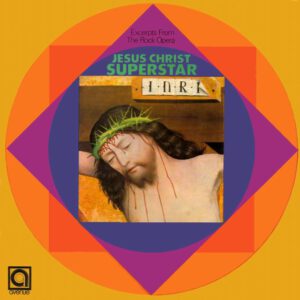 I was not at the session when Alan put the voices on the tracks, but from the sounds I would most certainly say that Danny Street would have been used and for the female parts, Dana Gillespie and Maggie Eaves & her Ladybirds. The other male voice with the gravel tone sounds to me like a singer who did our Rod Stewart recordings, i.e. Tony Craige.

Jesus Christ Superstar‘s line up consisted of our usual musicians we used on a regular basis: Clem Cattini on percussion; Bob Falloon, lead guitar; John Fiddy, bass guitar; Alan Hawkshaw, keyboards. I think we had Freddy Fendor as leader of the brass section and the strings would have been The BBC Light Orchestra.

Side 1:
Overture
Heaven On Their Minds
What’s The Buzz
Everything’s Alright
Pilate’s Dream
I Don’t Know How To Love Him
Damned For All Time / Blood Money

In this case, no less noteworthy a reviewer than Vinyl Vulture once characterized this particular release as what “could well be the most polite version of JCS out there, with what sounds like a Julie Andrews impersonator in the role of Mary adding an almost laughably prim edge to the otherwise funky ‘…Buzz’” and goes on to note that “Judas is doing a bit of an Elvis impersonation as well.” This fan finds it hard to disagree with V²’s ultimate verdict: “An unspectacular take on the spectacular.” Clean, and flat in terms of rock feel; no noticeable flaws, but no particularly memorable delights or effects either.

The fan community, in its nascent days, often confused this rendition with the Kingsway Youth Opera Company recording; while the rendition named for Caddy is one of the most mass-produced JCS “knock-off” albums, it is an entirely different entity from the Kingsway recording, which features different tracks and orchestrations, and has never — to our knowledge — been duplicated in like fashion. It has since emerged that this was the result of confusion thanks to another “knock-off” release in the Nineties credited to the “Mayfair Ensemble,” which compiled tracks from several studio highlights recordings of JCS, with remastered sound, leading fans to erroneously believe that tracks on that album emanated from a single original source rather than a single label licensing multiple tracks for its own use.

Often, such recordings were graced with faux-sophisticated liner notes that attempted to add an air of authenticity to the proceedings. Such was the case with a budget release of the Caddy rendition in Canada, which featured the following:

There came suddenly upon the face of this orb… a unique illumination, gradually spreading tendrils of love and compassion for all to know.

Through all ages man has sought to know the artisan who so intricately wove the fabric of his cosmos; perhaps he felt a need to enquire (sic) of his future… to allay the fears of ignorance… to understand existence.

Jesus Christ Superstar has become a relevant statement of the present milieu of self-doubt and soul-searching. Man’s idiosyncrasies are as infinite as his incapabilities in communicating with others of his species.

With the advent of rock and roll, the music scene has in general undergone what may be referred to as ‘severe transgressions.’

The trend now is toward truth and realism conveyed to us by means of totally fresh and creative abstractions… both in format and presentation through the media.

Classic renditions have given rise to the ‘Rock Opera.’ Today’s presentations are simultaneously entertaining and critical.

In this album Alan Caddy and his orchestra have tastefully compiled and reproduced what we consider to be an enjoyable cross-section of the opera’s finest musical highlights.

Ultimately, this album doesn’t offer much for the seasoned JCS fan, but it definitely left an impact. To quote an interview with an exec for one of the labels that released this album, “Alan was very pleased with the final result and I’m happy to see it still sells on-line, even today, almost 40 years later.”