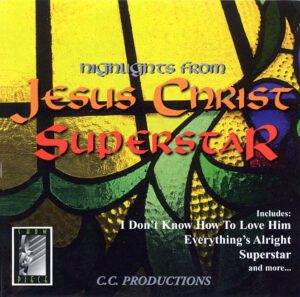 Such is the case with this example from Tring International, which was released in America under the banner of C.C. Productions. As far as budget recordings go, there are definitely worse ones out there, but this is decidedly nothing special. The orchestration is not overly Seventies, but not particularly noteworthy because of that either. A good portion of the instruments are real and very capably played, but the larger orchestra parts (remember: “economy” production) are synthesized. By and large, the score itself manages to rise above this treatment, and not all of it is mediocre; the arrangement of “Superstar,” for example, shines a more modern (for its day) light on the track and is actually rather good, with some interesting use of synth.

As for the performances, they mainly fall into the realm of “passable.” John Cabar manages to portray Jesus with adequate feeling in spite of the sparse representation his character receives on the recording. Dominique Spicer, though she has a nice voice, isn’t really doing anything new here; it’s slightly disappointing to hear her basically mimicking Claire Moore from the 20th anniversary London cast. The stand-out of the semi-sorry affair is Lee Erving, who has the perfect voice for Judas and does the best with what he is given; check out the creativity in his interpretation of “Heaven On Their Minds.”

There are so many good versions of JCS on the market that it’s hard to imagine why someone would go out of their way to buy this, but if it’s the only one in the shop (provided you still actually go to a place that sells physical products; it is said my ancestors called them “record stores”), you won’t regret it very much. It’s not wonderful, but it doesn’t deserve the panning that some people give it either, at least in this reviewer’s opinion.