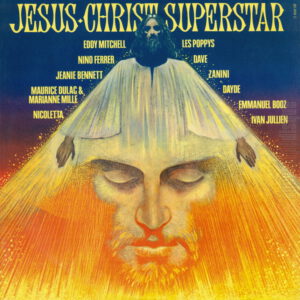 This effort by French label Barclay is of mysterious origin. Not much is known about this recording, except that it’s now classed as ultra rare by all websites which deal in used LP’s, we at JCS Zone had only ever heard a few selections that were ripped to YouTube (until recently — as of April 2019, we’ve tracked down a complete copy and made a lossless transfer direct from vinyl, which can be heard above), and it’s a collection of French artists of varying degrees of popularity performing songs from the score.

The translated lyrics are by noted French songwriter Pierre Delanoë, most known for his work with such performers as Edith Piaf, Charles Aznavour, Petula Clark, Johnny Hallyday, and Mireille Mathieu. As his translations were also used in the original French production, which did not go well, it’s unclear as to whether they originated with this album, or if the album came after the Paris stage premiere and was part of the continued — ultimately vain — effort to make JCS “happen” in France (more about all this on the page for the French cast recording). The arrangements range from jazz/funk (for which Ivan Jullien, the arranger, was apparently well-known), to generic rock and pop, to a children’s choir (Les Poppys) on “Hosanna,” to what is reported as a freaky prog take on the crucifixion sequence. (As if it wasn’t freaky enough already; the original recording on the concept album still gives this fan shivers!)

In any event, for being so obscure, the album boasts some terrific Seventies orchestrations, layered with hallmark-quality jazz horns. Stand-out tracks in particular include “Heaven On Their Minds,” “Gethsemane,” and a “Superstar” that erupts at an incredibly fast tempo. (Joked resident JCS Zone interviewer Andrew J. Simpson, “Seems the orchestra was not getting paid by the hour here. I think I have whiplash from headbanging to it.”)