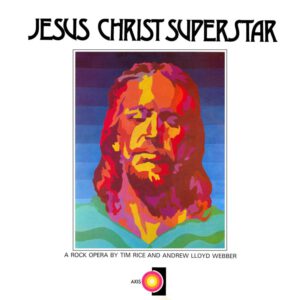 Mike Redway and Danny Street are credited on the covers of some editions of this recording, and a few trading lists down the years have reported that Redway plays the roles of both Jesus and Judas on it. Any other information is unknown.

Music For Pleasure was the king of budget-priced labels in its day, dealing in popular and classical music in equal shares; a major label group, EMI, provided the source material, and outside agents like publisher Paul Hamlyn, who was partner with EMI in the initial MFP joint venture, set up distribution in so-called non-traditional outlets (e.g., W.H. Smith bookstores). Sometimes existing big-label recordings by such diverse artists as Adamo, The Animals, Shirley Bassey, The Beach Boys, The Beatles (both as a group and solo), Blondie, Nat King Cole, Jimi Hendrix, Marillion, Dean Martin, producer Mickie Most, Pink Floyd, Queen, Cliff Richard, Kenny Rogers, Frank Sinatra, Steely Dan (a rare early track appeared on one of MFP’s many compilations), Roger Whitaker, and most memorably the St. Winifred’s School Choir which scored 1980’s much-coveted Christmas #1 with “There’s No One Quite Like Grandma,” were dumped into budget packaging by MFP; sometimes original material — including studio cast recordings of such musical theater chestnuts as Carousel, The Sound of Music, and South Pacific, and the obligatory attention-getting soundalike cover versions of current hits by anonymous vocalists — was cut on the cheap and released direct to the shops.

With that in mind, there is little surprise that JCS eventually met with the same treatment from this group. An unnamed bunch of top session players (fairly large orchestra in attendance, by the sound of the brass letting it rip and the drummer that really has to go for it to be heard above everyone else) rattles off the tunes to great effect under the watchful eye of producer Walter Ridley. Aside from a screechy Mary who fortunately goes un-credited (she’d no doubt be tracked down and attacked by more rabid JCS fans if they knew who she was), the bloke who seems to be doing all of the parts himself does a fine job. The soppier tunes slightly over-egg the pudding with schmaltz, but overall it’s a fine effort.