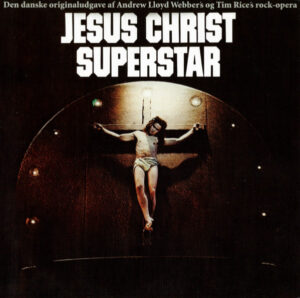 We have provided a complete recording of this now out-of-print album on our YouTube Channel. Unfortunately the video has been blocked by Universal Music A/S and is unavailable at this time.

Peter Winsnes performs the song Gethsemane on a Danish television program in 1971.

Translation by Johannes Møllehave
Orchestra under the direction of Peder Kragerup

Not much is known about the Danish production or how it was received, at least at the moment. Internet searches turned up little, and the only even remotely useful information comes from Tim Rice’s autobiography, which states that “At the start of 1972 […] [f]or some strange reason, the first European version to emerge was in Denmark,” and that he was “persuaded […] to get onto an airplane for the first time in eight months to attend the Copenhagen opening.” (Just before the first American concert tour began, Rice had collapsed mid-production meeting in New York, and medical personnel reported elevated blood pressure levels and recommended further testing. Tim, who had been burning the candle at both ends for some time jetting around the world, suffered from an immediate — and lasting — case of hypochondria but was ultimately diagnosed by UK doctors with nothing more serious than exhaustion, recommending a holiday as the cure. At that time, Rice had decided he “could not face getting onto another airplane, ever,” though time and obligation — as we have seen — eventually relieved him of that resolve.)

Rice’s autobiography also proved helpful in determining a “chicken or egg” type of question brought on by the similar album covers and casting of the Danish and Swedish productions (Bruno Wintzell and Dan Tillberg appeared as Jesus and Simon, respectively, on both recordings, though Peter Winsnes — of Swedish band The Spotnicks — played the title role live in Sweden, going on to join the Copenhagen cast, where he was crowned “SUPER-SUPERSTAR!” by the Danish daily paper Politiken in its headlines) when he went on to elaborate that “[t]he Swedish show was more or less a transplant of the earlier Copenhagen one.” (This is further confirmed by the presence of the same producers and musical director for the Swedish recording on this album.) While we cannot report with much authority on how the critics or audiences received these productions (though there is more to say about Sweden on its respective page), it can be assumed that at the very least these productions must not have been taken all that seriously by the authors or their management, as Rice reports, “There was never a great likelihood of a Swede or Dane being called in for London.”

The Danish translation, based on the Discogs credits reported above, seems to have been undertaken by Johannes Møllehave. A Danish priest (obtained a degree in theology in 1963), author (one children’s book — a Danish folktale — in English and several Danish language publications from the mid-Seventies to today), and lecturer, Møllehave has been a popular modern Danish figure, attracting large audiences to his lectures and TV appearances. Known primarily for his interest in Søren Kierkegaard, H.C. Andersen, and Storm P, he has won a number of Danish awards for his down-to-earth presentations of Danish authors and philosophers and his command of his mother tongue. And they say JCS isn’t for intellectuals…