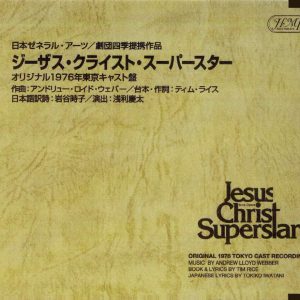 Unfortunately, this album is out of print. Some copies may still be found through such sources as eBay or Discogs. Thankfully, you can listen to a sampling of tracks (above) from this recording thanks to our friends at WFMU, “the radio station that bites back.” (And if you like this taste of the chocolate, WFMU is also happy to give you a tour of the whole factory, metaphorically speaking.)

Act 1:
Overture
Heaven On Their Minds
What’s The Buzz
Everything’s Alright
This Jesus Must Die
Hosanna
Simon Zealotes / Poor Jerusalem
Pilate’s Dream
The Temple
Everything’s Alright (Reprise) / I Don’t Know How To Love Him
Damned For All Time / Blood Money

Jesus Christ Superstar continued its march onward into the mid-Seventies, going from strength to strength and enjoying much success around the world. The Japanese premiere came at the hands of the Shiki Theatrical Company, one of Japan’s best-known and largest producers. They were no strangers to a Western repertoire, having staged straight dramatic classics by the likes of Anouilh and Giraudoux, but in the late Seventies, they began branching into modern musicals, JCS being one example, directed by the company’s co-founder Keita Asari (they would go on to present most of the major Western transfers, including Webber’s Evita, Cats, and Phantom, as well as such hits as A Chorus Line, Mamma Mia!, and West Side Story).

This recording of the original Japanese cast (which includes as Jesus none other than Chairman Kaga, from the Japanese version of Iron Chef; he was critically acclaimed in the role, and played it for four seasons) is perhaps one of the more unusual renditions. Where European productions offer a “standard” approach, the Japanese give us something rather more… expressive. Synthesizers rear their head (albeit less dramatically than in the Spanish rendition), some of the numbers are performed at a faster tempo, which lends more dynamics and tension in the right places, and the attention to detail is nothing short of amazing: the sound is clean, smooth, lacking in the muddiness of other JCS recordings from this era, and the accompaniment, rather than drowning out its performers, supports the vocals nicely.

Would that the vocals were slightly better; the Pilate is lame, the Judas sounds like he’s actually trying to commit suicide in his death scene, and the rest of the cast sound fairly generic. Still, the recording is well worth the listen as a part of JCS history; much like the California Youth Theatre recording heralded the beginning of a bright future for JCS productions in the U.S., the Shiki Theatrical Company went on to bring JCS to new heights worldwide.

After the initial premiere in a more traditional rendition (later dubbed the “Jerusalem Version”), in the late Eighties, Shiki premiered the “Japonesque Version,” a production in the style of traditional Japanese Kabuki theater. Jesus wore whiteface with dyed-blonde hair and a vaguely hippie-style net shirt, electric guitars were augmented by Asian rhythm instruments, and on a stark, angled stage loaded down with daihachi guruma (traditional wooden Japanese wagons), geishas met apostles, parasols crossed paths with crosses, and gentle Japanese strings mixed with honky-tonk piano. When Jesus was arrested, the soldiers who took him away were dressed as ancient Japanese warriors. King Herod made his entrance as a transvestite in a luxurious kimono with a rickshaw waiting behind him, twirling a fan. At the foot of the cross, the white-faced mob below formed a cross-hatch pattern with bamboo rods, creating a striking symbolic image of dozens of crosses formed in the wake of Christ’s death. True, there were some concessions to JCS’ style that left Kabuki conventions in the dust: female performers were included, and while the daihachi guruma that were repositioned for each new scene were not traditional Kabuki set pieces, they did create a sense of the Japanese setting.

But this was in keeping with the nature of the show. To quote Asari, who directed this version as well, he was particularly interested in re-adapting JCS to a Kabuki approach “because Christianity is the essence of Western culture” and he wanted to “create a fusion and collision of East and West.” Soon this fusion and collision would become literal. In August 1991, Andrew Lloyd Webber would bring this production and its cast to the West End for a successful one-week run at the Dominion Theatre during the Japan Festival in London, saying, “It is the best production of Jesus Christ Superstar I’ve ever seen. It’s what we should have opened with in America 20 years ago. And I mean that.” (It wouldn’t be the last time he said this about a JCS production he was particularly enthusiastic about, but that’s a story that will come into play frequently later in this discography.)

But long before that came the original Tokyo run. With this recording, we can see… well, hear… “what had happened, how it all began,” to quote “Pilate’s Dream.”