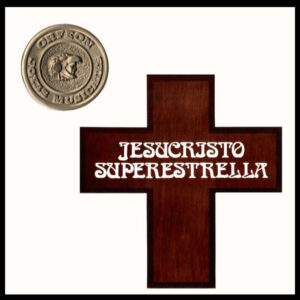 This recording was made at the Teatro de La Capilla, Coyoacan, and in San Jeronimo. We appreciate the additional recording equipment and technical advice of Mara International, S.A.

Jesus Christ Superstar continued its march onward into the mid-Seventies, going from strength to strength and enjoying much success around the world. It first came to Mexico in 1975 through the pioneering efforts of Julissa, a notorious triple-threat celebrity of the time. The daughter of Mexican radio and TV personality Don Luis de Llano Palmer and actress Rita Macedo, she began her career at the age of 14 as part of a rock group, The Spitfires, with her brother Luis. She took second place in a radio talent competition and went on to record gold and platinum rock albums for CBS (and one single for Capitol) in the early Sixties, juggling her music with a burgeoning career in film and TV acting.

In the Seventies, looking to explore new horizons and create new vehicles for herself, she branched into theatrical production in Mexico, securing the rights to present translations of such major then-current fare as Grease, Joseph and the Amazing Technicolor Dreamcoat, Pippin, and The Rocky Horror Show, which she would frequently adapt herself, star in, and even direct. These productions were usually straightforward imports of the material, sometimes even down to the details of previous major incarnations in English (for example, a listen to the original recording of El Show de Terror de Rocky indicates more than passing influence in its arrangements and orchestrations from the original Roxy cast album and the motion picture soundtrack, respectively, of Rocky Horror, often sounding rather like a Spanish clone done on the cheap).

JCS was no different, as a copy and a star vehicle; the production design (as can be seen in the photos sprinkled throughout this entry) was a barely-altered copy of the original Broadway rendition, the direction was by Charles Gray (production supervisor for Broadway and later director of several productions worldwide), the orchestrations as performed by local rock band Zig-Zag hewed closely to the model of the rushed-sounding Broadway cast recording in many places, the casting was in the mold of the Broadway production (for example, Enrique del Olmo frequently sounds like a close imitation of Jeff Fenholt as Jesus), and at the center of the show was Julissa, as a translator (under her real name J.I. de Llano, in collaboration with the show’s musical director, Marcos Lizama) and Mary Magdalene.

Indeed, the production was almost subject to further nepotism: Enrique del Olmo was originally cast in the role of Judas, with Julissa’s then-husband Benny Ibarra penciled in for the title role, before the popular 1973 film (and, no doubt, a second look at casting for the Broadway company) convinced them that they needed a dark-skinned person for the part of Judas, the better for success to rub off on them. Jorge Abraham, who had already worked with Enrique del Olmo in another musical, was cast as a result; though the recording shows he’s no Carl Anderson, Ben Vereen, or even Teddy Bautista (the reigning Judas in non-Latin American Spanish adaptations), Abraham went on to leave such a mark on his role that he was the only member of the original cast to retain the part in all three subsequent revivals in 1980, 1983, and 1984 (del Olmo would also make it to 1980 and 1983, while Julissa would star in and produce 1980, produce 1983, and co-direct 1984).

Jesucristo Súperestrella (as the Mexican translation would have it) opened to great acclaim at the Teatro Ferrocarrilero in Mexico City, with raves for the standout performances of Luis de León (Caiaphas), Luis Torner (Pilate), and Manuel Gurría (Herod), and generally positive notices for Héctor Ortíz (Simon), Roberto Nieto (Annas), and Homero Wimer (Peter). The show went on to win several awards, including “Mejor Producción Musical del Año” from La Asociación Mexicana de Críticos de Teatro, the Premio from La Unión de Periodistas, “Mejor Espectáculo Musical” from La Unión de Críticos y Cronistas de Teatro, and “La Mejor Comedia Musical” from El Sol de Oro. It also went on to a successful run in concert form at the Museo Nacional del Virreinato as part of Festival Tepotzotlan ’75, and was revived in concert form in 1980 (at Teatro de la Ciudad) and in full production in 1983 (at Teatro Lirico) and 1984 (at Televiteatros II during the Lenten season).

As captured on record, the ’75 cast album’s lowest point is the sound, evidently taken down for posterity by someone with a distinct lack of technical expertise — the album is so riddled with echo and reverberation it sounds like it was recorded at a public pool rather than in a theater. (The percussion, in particular, is done no favors by this recording, sounding like a child’s drum kit; those cymbals are just awful.) However, this may be owing to the circumstances in which the original vinyl copies were pressed. As with many of Orfeón Records’ theatrical releases, it was pressed on recycled vinyl, which is what bootlegs and low-budget independent recordings were usually released on at the time. Even some near-mint condition copies of the LP would now sound terrible because of the horrible quality vinyl it was pressed on.

At any rate, the performances aren’t that bad, and the songs have been adapted in translation without losing their original essence or meaning, which is good to hear considering “The Time Warp” wound up as “Baile Del Sapo” (“Dance of the Frogs”) in El Show de Terror de Rocky. For being the first Latin American Spanish version of JCS, it’s decent — not the best of all the Spanish versions, but certainly not the worst — and it’s a shame that it has been overshadowed in the Spanish-speaking community by the adaptation presented in Spain.