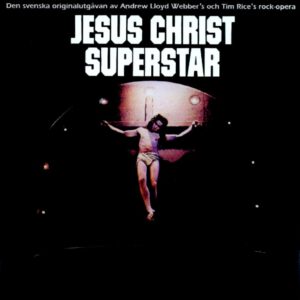 NOTE: This list is reconstructed, to the best of our ability, from Discogs and CastAlbums.org entries, and only represents those known to appear in leading or featured roles.

Let us set the scene: it is now 1972. A year ago, Jesus Christ Superstar had just reached Broadway as a spectacular, flamboyant, over-the-top, eye-popping extravaganza. And neither the critics nor Tim Rice and Andrew Lloyd Webber were won over by director Tom O’Horgan’s outrageous sensory-assaulting production. In later years, writing programme notes for a revival, Webber would opine, “Looking back 25 years later, I suppose there were pluses. Because the production was so awful, no production of Superstar in the rest of the world was the same, so I had a baptism of fire by a kaleidoscopic gaggle of directors.” As Rice described the same period in his autobiography, “…it was extremely useful for us all to see other ways it could be done […] Because of the general lack of confidence in the O’Horgan version, all of these were brand new productions, and none bore any resemblance to the Broadway show.”

Tim Rice’s autobiography proved helpful in determining a “chicken or egg” type of question brought on by the similar album covers and casting of the Danish and Swedish productions (Bruno Wintzell and Dan Tillberg appeared as Jesus and Simon, respectively, on both recordings, though Peter Winsnes — of Swedish band The Spotnicks — played the title role live in Sweden, going on to join the Copenhagen cast, where he was crowned “SUPER-SUPERSTAR!” by the Danish daily paper Politiken in its headlines) when he reported that “[t]he Swedish show was more or less a transplant of the earlier Copenhagen one.” Though not much is recorded about the reception of the Danish production, the Swedish opening on February 18, 1972 at the Scandinavium in Göteborg was met with much fanfare, playing to 74,000 people on opening night and breaking sales records (at the time, critics deemed its new numbers “untouchable” in sales terms) during its five-day, ten-performance run.

Nestled within the cast, just before her ABBA days, was Agnetha Fältskog in the role of Mary Magdalene. Her then-husband (and later ABBA bandmate) Björn Ulvaeus had heard about the Swedish production and suggested she audition. Ultimately, casting for the role came down to the wire, with the producers split over choosing Agnetha and Titti Sjöblom, the daughter of much respected Swedish singer/actress Alice Babs. Ultimately, a compromise was reached; though Agnetha was chosen for the role and headlined the production (with Adele Lipuma taking on the part for matinee performances), Sjöblom performed the role twice during its Scandinavium run and went on to perform as Mary opposite Wintzell’s Jesus when the show toured to Stockholm, Örebro and Gävle.

Despite the Swedish production’s success, it can be assumed that at the very least it must not have been taken all that seriously by the authors or their management, as Rice reports, “There was never a great likelihood of a Swede or Dane being called in for London.”