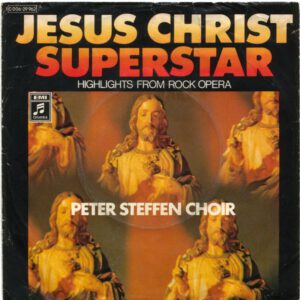 Credited to the Peter Steffen Choir

Side 1:
Jesus Christ Superstar – Highlights From The Rock Opera – Part I

In this case, German schlager singer, Peter Steffen (born Ernst Bublitz), mainly known for performing both solo and in a folk-oriented duo (Peter Steffen und Sein Kleiner Junge) with his son, gets together some session singers and decides to give two brief medleys from JCS a stab. More a 7″ single than a full album, it’s not particularly memorable and doesn’t seem to have made that big a splash at the time. You’d be forgiven for giving this one a miss.