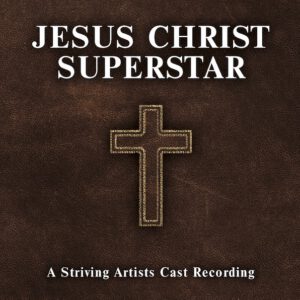 Act 1:
Overture
Heaven On Their Minds
What’s The Buzz / Strange Thing, Mystifying
Then We Are Decided
Everything’s Alright
This Jesus Must Die
Hosanna
Simon Zealotes / Poor Jerusalem
Pilate’s Dream
The Temple
I Don’t Know How To Love Him
Damned For All Time / Blood Money

Anyone who has followed Jesus Christ Superstar over the years knows that the album, show, and film have never really gone out of style; they’ve merely been appreciated in different ways. At the end of the 20th century and into the 21st, this has begun to manifest itself in audio form in a series of tributes to JCS, including A Resurrection, This Jesus Must Die, Jesus Christ Surferstar, the Ultrasonic Rock Orchestra’s updated riff on the concept album, Jesus Christ Supernova, and most recently this studio recording.

In 2006, Greg Luzitano formed Striving Artists Theatre Company (based primarily in the Northeastern U.S., specifically the New England area) with the intention of having a theatrical troupe with four basic branches: live performances of plays, original writing, short films, and music. Together, Striving Artists has successfully produced a pile of shows (about half written by group members), one book of original writing, six short films, and — through its label, SAC Sounds — four albums, this rendition of JCS being the fourth.

Since early in their history, Striving Artists had produced very popular holiday shows centered on Luzitano’s arrangements of popular (and some more obscure) holiday tunes, which formed the base of their first two albums; the third had been a solo one-man effort on Luzitano’s part where he played and sang everything. Striving Artists were seeking to branch into musicals next, and JCS specifically, but lacked the budget or bandwidth to pull off a full-scale live production, given their size and resources.

As their previous albums had done well locally, Luzitano reasoned that the next best thing to a live production would be to assemble a studio cast, allowing him both to cast the singers he wanted without needing to worry about availability for rehearsals and performances (thus allowing him to use singers he had worked with in the past who had since moved to other parts of the country without requiring them to temporarily relocate) and to reach a somewhat broader audience. As Luzitano put it, “…all of our local fans could listen to it, but it could also be heard by people who live nowhere near us and would never be able to see one of our live shows. It also exists forever, so any future fans would be able to go back and find it years later if they were so inclined.”

Casting was a snap, as Luzitano was engaged to play guitar in a live production of JCS while prepping the album. Says he, “…that served as a great recruiting opportunity. My singers for Judas, Caiaphas, Herod, and several of the other ensemble or featured roles came from that production, and the rest came from past Striving Artists productions or recordings. Having several singers new to our group in such large roles also helped to expand our audience somewhat, always a plus.”

Over the course of eighteen months, the album was recorded largely in Luzitano’s home studio, which was no mean feat. As Greg points out, “The […] tough thing was trying to make a band that was essentially me and a drummer sound like we were in-the-pocket, so to speak, when so much of it was overdubs.” And getting the right sound proved challenging: “I spent a lot of time trying to get some of those great late-sixties guitar tones, ’cause I wanted the album to sound sort of rough around the edges like the original did. […] I used a Strat, a Precision Bass, Les Paul, and a Gretsch to get some nice vintage tones. And then I basically spent hours and hours and hours listening to the original rhythm tracks to try and learn the [Alan] Spenner bass parts (‘What’s The Buzz’ took forever) and the [Henry] McCullough guitar parts by ear.” In post-production, early synthesized placeholders were eventually replaced with actual orchestral parts as well. (In this fan’s estimation, it ultimately shakes out to about 80% Brown Album, 15% ’73 film, and 5% later renditions. In pre-production, Luzitano confidently, and ultimately truthfully, assured the JCS Zone forum, “This won’t be a reinvention like the ’92 Aussie or the more recent Ultrasonic versions. […] it’ll hew pretty closely to the original.”)

Behind the scenes trailer

The arrangements, for the most part, stick to the classics, and with good reason: “I grew up listening to the Brown Album, and I used that as the template, ’cause the score has never improved on that. But unlike a couple of previous tributes to the Brown Album (Resurrection, Ultrasonic), I wanted to include some of the stuff that was added or changed in later iterations. […] the original concept album is my baseline, but with some of the additions that came later (added lyrics/songs). I referenced the three PDF scores that are floating around, and probably about 65% of the orchestrations came from those, or was a combination.”

To be more specific about exactly what is different from most tributes, the Striving Artists recording includes “Then We Are Decided” (especially rare; says Greg, “a particular pain [to learn], because of course there’s no official sheet music floating around for that one, and the soundtrack sounds like it was recorded with two tin cans and some twine, plus it’s a really weird angular chord progression”), the extra verse in “Hosanna” (he also “kept the key change for the final chorus […] but retained the tag at the end of the original instead of repeating ‘superstar’ the way it does in the ’96 revival”), the new lyrics in “The Temple” (and indeed some, but not all, of the new lyrics from the 1996 revisions elsewhere; he debated including a newer change to “Gethsemane,” but nixed it for fear of losing credibility by including anything that reminded people of the arena tour), “Could We Start Again Please,” and so forth.

With all studio cast recordings, it’s generally the opinion of this particular fan that since the performers lack the experience of getting on a stage and actually performing the show in front of an audience, the performances are pleasant enough, but not always up to par with a real cast album. But this one is a cut above the rest: it sounds fresh and edgy without compromising the show’s original intent; while these arrangements, faithful and quite good, give the score a much-needed shot of testosterone after years of “evolving” from its initial rock roots into something rather softened, they (thankfully) don’t represent Christ’s triumphal entry to the headbangers’ ball. The orchestra (such as it is) adds depth and color, but the rhythm section — a remarkable one-man effort by Luzitano, given what he was up against, with unbelievable live drums by Nate Goncalo — is mostly the anchor. As Jesus, Greg is not afraid of the throat-shredder notes, managing the High G in “Gethsemane” and even attempting Ian Gillan’s showcase moment in “What’s The Buzz,” rarely heard in other renditions, to surprising effect.

Before I close, a word to the more nitpicky fans among us: it’s important to remember that it’s easy to spot mistakes, blips, and bum notes in recordings like these, but to focus entirely on those is to miss the point rather than to judge objectively. It was a labor of love, and for that alone, it stands as a worthy (in this case, rather decent) entry in the catalogue.