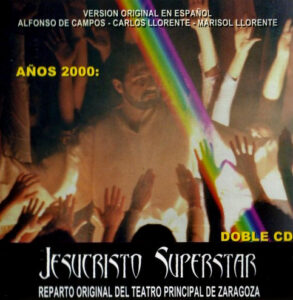 Jesus Christ Superstar has developed a rich history of European production in the late 20th and early 21st centuries. Around the turn of the millennium, several presentations were mounted to celebrate such a momentous occasion. Among them was this amateur production, which opened at Teatro Salesianos on December 8, 2000, before transferring to Teatro Principal, Zaragoza.

In a recent retrospective interview (linked above), its conductor/arranger, Jesús Aparicio, recalled being sought out by the production company (Asociación Deliciosa Joven, led by Laura Coccián) to reinvent the score for a modern audience, for a charity benefit event on a small budget (specifically, he was told, “I have 50,000 pesetas, and with that, you have to do everything”).

Then a bank director whose employer was amid a merger, Aparicio didn’t have a lot of time to devote to the show. Even if he did, assembling the musical end of things was no mean feat. As he put it, “It was one of the most difficult and ambitious projects that I have ever been offered. As a musician I can tell you that it is a very, very complicated score, with constant tempo and rhythm changes and very delicate instrumentation, since it was about mixing classic rock with symphonic elements and that is not easy at all.” Compounding the problem, he said, “we did not have scores or even a license from [Andrew Lloyd] Webber, and on top of that, my English at that time was extremely sloppy.” However, given the altruism of the venture, he ultimately decided that the ends justified the means and dove in.

On that small budget, throwing in some of his own money as well, Aparicio rapidly assembled a team and an ad-hoc recording studio in Olvés and got to work. Since, as was mentioned previously, they had no scores, he got hold of an LP of the Camilo Sesto version and began developing the new arrangements by ear. Test recordings were quickly assembled and sent to the producers for audition purposes, and the recording and production gradually developed over a year.

The recording process wasn’t easy; he recalls that on many occasions, he went above and beyond the call of duty to coax the best performance and characterizations from his cast, at times resorting to putting them through physical exercises such as push-ups and sprints before getting them behind the microphone. “Gethsemane” was recorded in an all-night session after “a quick dinner […] and four drinks to give us strength.” (Though the recording credits the singers who ultimately played the roles live, Aparicio even contends that, due to a lack of available performers and despite his vocal shortcomings, he wound up playing both Annas and Herod on the album, as well as reinforcing background vocals, and that Alfonso de Campos, in addition to playing the title role, did double duty as Caiaphas and also lent a hand in the chorus.) But hard work did pay off; as Aparicio remembered, “I didn’t believe what I was hearing during final mixing, considering the technical and human resources that we had.”

After ultimately obtaining the proper permissions (at no small cost), its initial run at Teatro Salesianos in Aragon was so successful that it led to a sold-out transfer to Teatro Principal in Zaragoza. A million pesetas were raised from production proceeds and donated to charity, and the show received major press coverage in, among other media sources, Heraldo de Aragón.

It would have gone further (a major Spanish bank, iberCaja, showed interest in sponsoring a national tour of Spain for the show to celebrate a corporate anniversary), but — not for the first nor the last time — permission to continue a successful production was denied from Andrew Lloyd Webber’s end. While JCS Zone has admittedly never been especially sympathetic to Webber’s side of any story, one wonders if the development of a tie-in album without his knowledge or consent played a role… At any rate, Aparicio took bittersweet comfort in the fact that a Mexican revival that had Webber’s backing opened to very little success shortly thereafter.

Looking back, with more resources and more experience in music and recording, Aparicio feels he’d surely achieve better results were he to attempt it again today, but he remains proud of their work. Listening to the recording, it’s hard not to agree that these performers achieved the best they could offer, given the hand they were dealt.