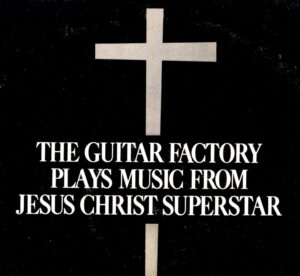 Unfortunately, this album is out of print. Some copies may still be found through such sources as eBay or Discogs.

* signifies that this guitarist is actually Lee Grayson, credited under a pseudonym owing to contractual obligations/conflicts at the time. As well as appearing on this release, Grayson (according to a contributor at Discogs) also played guitar in an unauthorized touring version, possibly featuring the other credited members.

Side 2:
I Only Want To Say (Gethsemane)
The Last Supper
I Don’t Know How To Love Him
Superstar

The Guitar Factory offers a rather funky, psychedelic take built from guitar (via wah-wah), drums, keys (including what sounds like a real harpsichord!), vibes, and even a banjo; witness the absolutely killer “Heaven On Their Minds,” the best — for this author’s money — take on “Everything’s Alright” (which can be quite lame in the wrong hands), the crazy sitar version of “Hosanna,” the very proggy “Gethsemane,” all leading to some cracking action on the title cut, bringing the album home with a bang. High quality stuff throughout, and when the album’s over, it doesn’t feel like you’ve breezed through the nine tracks on display. A good, melodic sound, with no special frills or effects; true, a little overly dominated by guitar, but what does one expect with an album credited to “The Guitar Factory,” after all?

This author happens to like his JCS best when people try something a bit different with it, and look at the show in a less reverential light. As far as that criteria goes, this album is damn good, bordering on fantastic! (For sticklers, I will only add that it works best if you don’t treat this recording as a rendition of a dramatic work, but as something pleasant to listen to when you’re in a good mood.)