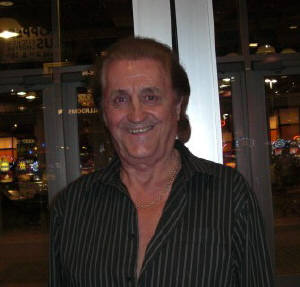 Q. What were your initial thoughts of Superstar?
A. I was in a band with Victor Brox (the original Caiaphas) called The Congregation and he came to me and told me about these two guys who wrote a rock opera about Jesus. I didn’t think it was a good idea. I thought, “These guys are crazy, writing an opera about Jesus!” I went to the studio with Victor anyway to hear the music and thought, “Wow, that’s great!”

Q. What was it like recording the concept album? How much were you involved?
A. One of the things that happened during the recording was that they ran out of money before they finished recording, so they couldn’t afford to pay us. I charged them £1,500 every time I came in to record, ’cause I had a number one hit at the time with Plastic Penny, and they couldn’t afford that anymore, so they started offering a percentage of the royalties as payment. We were all skeptical about it, ’cause if it didn’t do well, we’d be out of money. One night when I came in to the studio to record, the engineer was mixing the final versions of some songs and he asked if I wanted to hear them. I said, “Sure,” and he played the one Yvonne sang, you know, the (Sings) “I Don’t Know How to Love Him” one. The trouble with concept albums, though, is that so many of these songs stand out on their own when you take them out of the story. This one sounded just like a love song you’d hear on the radio about a boyfriend or something, but it was about Jesus, you know? After that, he played the Overture and I heard Ian Gillan singing Jesus and I said right there, “I’ll take the percentage!” I knew this was gonna be big as soon as I heard Ian sing. I still get money today from that ’cause it keeps selling. I also got to know Andrew and Tim pretty well during that time, they were really great guys. Crazy, but great.

Q. How did you get involved in the Kingsway Youth Opera recording? How were you chosen for Jesus?
A. The people at Decca Records, after we’d finished recording the first album, called me back and asked me if I wanted to be on another Superstar album with them, and I said sure. This time, I was just paid a fee for recording, I didn’t get any royalties. It was between John Goodison, who was in a band called The Brotherhood of Man, and me for Jesus and Judas, and I wanted Judas. We flipped a coin and I got Jesus, but I always wanted to do Judas.

Q. Did you have very much interaction with the cast?
A. During recordings, usually you just come in, sing your part, and go home. We don’t really get to meet the other people.

Q. Did this company go on tour or perform other than this album?
A. I never played anyone on stage, that’s too much work!

Q. Do you remember working with anyone from that recording, Martin Jay perhaps?
A. Yeah, I remember Martin, he played Simon, right? I’m surprised I knew that! He was a session singer for Pickwick Records with a lot of us back then.

Q. Do people recognize you as “Brian Keith, the guy who played Annas on the JCS concept album”?
A. Most people here in Vegas don’t really know that part of me unless it’s old friends. When I worked at the House of Blues, I played trumpet in a band there, the narrator would come on every night and introduce us and he’d say that “this is Brian O’Shea, who had two number one hits with the band Plastic Penny and played Annas in the original Jesus Christ Superstar album.” But other than that, no, people don’t know that side of me. I also don’t go by Brian Keith anymore. I became Brian Keith in the 60’s ’cause O’Shea is just so damn Irish. In that time I’d do hundreds and hundreds of interviews a year and they’d always ask me where in Ireland I was from, and I’d say, “I’m not Irish, I’m from Scotland,” and they’d say, “Well how can you be from Scotland if your name is O’Shea?” Sean Connery has the same problem, but not as much. My ancestors were Irish, you know, but I was born and raised in Scotland. So I was driving around Piccadilly Circus one day and I saw a marquee advertising the movie With Six You Get Egg Roll, starring Doris Day and Brian Keith. And I said, “That’s my name!” When I came to Vegas in the 80’s I changed my name back because your name doesn’t matter in America. I used to get in fights all the time in London. People would want to kill you ’cause you’re Irish. I mean, I didn’t want to get killed ’cause someone thought I was Irish, so that’s another reason I changed my name. Where do your people come from?

Q. My family’s mostly Polish.
A. Ah, well for every Polish joke you hear in the U.S., you have the same one in England about the Irish. One joke I know is: “What do you get when you cross a German and a Polack?  A guy who wants to conquer the world, but doesn’t know why!” (Laughs)

Q. Who has been your biggest influence on your vocal style?
A. Now, I don’t think I’m a really great singer, but I have a signature. When you hear a record, you know it’s me instantly. I have that sound. My favorite singer is Ray Charles, you know, when I die and come back, I want to be Ray Charles. People tell me I sound a lot like him, a lot like Joe Cocker too. I do some of his songs in the band I’m in. I come out with the little tie-dye shirt and perform his songs. I have the same kind of scratchy voice as him. Six months ago… my girlfriend would always call me and say, “Here’s a guy who sounds like you!” It would be guys like Bob Seger, Joe Cocker and I’d say, “No, that’s not me!” A few months ago, she called again and said, “Listen to this guy, sounds like to you!” and it was me, on a compilation from French Canadian Quebec, excerpts from Andrew Lloyd Webber as Annas, and for once I said, “IT IS ME!” Then I said, “Where’s my money? They owe me money!” I had a five year contract with them, but I lost it. It’s very weird to hear my voice on a French Canadian record. I tried to get in touch with them, but never tracked that down. Why don’t you track them down, since you’re so good at that stuff?

Q. Have you seen the 1973 JCS movie?
A. Yeah, the one with Ted Neeley. I was actually offered the movie along with John Gustafson. We flew out to meet with Norman Jewison, who was in his mid-20’s at the time. He asked me if I’d had any acting experience, and I was too young to know that if they ask you if you can ride a horse, you say yes and then learn how to ride a horse, but I was too young and I was honest and told them I’d never acted before. Neither of us got called back, obviously. I was a real big fan of the movie, especially Ted, but I really didn’t like the modernization with the tanks, guns, and planes. It’s such a great story, why mess with it?

Q. Have you seen the 2000 JCS movie?
A. That’s the one with the kids in the street clothes and graffiti and stuff, right? I thought it was really good, actually. I prefer it to the Ted Neeley version. It was very imaginative.

Q. Do you keep in contact with anyone from the early days?
A. My friend Ritchie Blackmore (Deep Purple, Rainbow) is coming to the House of Blues on the 27th. He’s doing an all acoustic set, you know, cowboy and Indian instruments. I’m gonna see him. I haven’t seen him in about 30 years, you know? We were in a band together called Screaming Lord (David) Sutch (who hung himself). He really couldn’t sing, just terrible, but he was a great showman. He had no singing talent, but great showmanship. We had all the rockers in that day. If you were a rocker, you played with Screaming Lord Sutch. He had Eric Clapton and lots of other guys. I saw Deep Purple and Ian Gillan six months ago at the House of Blues too, and then Thin Lizzy. I used to do sessions for studios and we’d get calls all the time to do session work, and we’d never have any idea what we’d be doing. I got a call one night at 10:00 from Decca Records and I had no idea what it was. I got to the studio and said, “What am I doing today?” And they said, “You’re working with Thin Lizzy.” It was 1971 then and they weren’t really famous then, so I said, “What, who are these guys?” And he said, “I don’t know. They’re in the bar, go talk to them.” I walked in the bar and I saw these guys with this long hair, and I knew, “That’s got to be the band.” I went up and introduced myself, and Phil Lynott was this half colored Irish guy, and he said, “I want you to scream for me.” And I was like, “What? What the hell do you mean?” “I’ve only been singing a little while, and I don’t know how to scream. I hear you’re the best screamer in town, so when we get to the studio, I’ll point at you, and you scream.” So that’s what I did. I went in the studio, he pointed, I went “AAAAAAAHHHH,” went to the bar for a drink, and never even heard the album.

Q. So what are you doing now?
A. I’m doing a brand new album with 12 songs that I wrote, produced, and arranged myself; it’s more or less like Stevie Ray Vaughan meets AC/DC meets Joe Cocker meets BB King and all that. It’s a lot of blues, R&B, rock and roll, and it’s all original. I play trombone and harmonica in bands, but not both at the same time. I’ve been trying to figure it out though, maybe if I play the trombone out of my ass? (Sings the lines “Jesus Christ! Superstar!” and laughs hysterically)