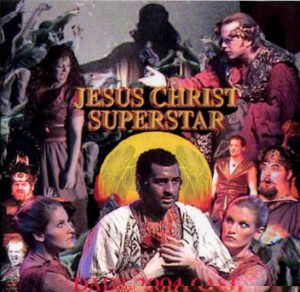 This interview was conducted with the cast of the 2004 production of JCS presented by the Dutch Apple Dinner Theatre of Lancaster, PA. If memory serves, the questions were not compiled by any one interviewer, but rather plucked from posters on the JCS.net forums (which were then at Network54; JCS.net had not yet become its own website). Those who were kind enough to answer questions were Corwyn Hodge (Judas), Donald Winsor (Pilate), Jason Simon (Herod), and Matt Brewer (Annas).

Q. What allegiance does your Judas take? Is your Judas a “bad guy” (i.e., Jerome Pradon, in the 2000 movie cast), or is your Judas a more tortured victim (i.e., Carl Anderson)?
CORWYN: My Judas is more tattered and torn. I feel that Judas had nothing but good intentions but didn’t understand the ramifications of his actions. It’s a complete struggle within himself and beyond himself throughout the show. Thanks!

Q. When you sing “Pilate’s Dream,” what is going through Pilate’s mind? I’ve seen many different Pilates completely butcher the song due to bad acting. What’s the secret?
DONALD: I experimented with a few different takes on the song, but I think it works best when it is what it is. The biggest pitfalls I see are either trying to make the song ‘more than it is’ by adding an up ending (i.e., trying to show off vocally or something) or being too shaken up from the beginning. I see it more as that nagging feeling you get when you can’t quite remember the entirety of a dream and throughout the song Pilate puts the pieces together, recollecting the dream as you sometimes do after a particularly strange or disturbing one. Pilate is a strong man — an intelligent man, and when something bothers him I see him trying to understand it and analyze it rather than allowing the fear to control him outright. That’s part of what makes his whole journey in this show interesting.

Q. Like Judas, Pilate — in the Bible and history — is regarded as a bad guy. How does your Pilate think of himself?
DONALD: I guess I almost answered that before. Pilate, to me, sees himself as the representative of a vastly superior culture amongst not-quite-savages. He’s sure he is far more intelligent and knows more of the true nature of the world than his charges (the Jews and etc.) and it is the challenging of that assuredness that he finds so very disturbing, bringing much of what he knows to be true into question. I could play this role forever and be happy, I find more every day.

Q. So, is Herod a ladies’ man, or are those girls just there for show?
JASON: I look at Herod as being the Hugh Hefner of his time, using his position of power and money to help feed his gluttonous desire to be the life of the party! Herod has spoiled himself in endless appetite for wine, women, song, and attention.

Q. You’re one of the top 10 Annas’ I’ve ever heard — are you ever planning to recreate your role? (Hint hint:  You should.)
MATT: Thank you, first of all, for the huge compliment, and yes, I would love to have the opportunity to recreate this role. This has been my first attempt at an evil character and I have had a blast with it!