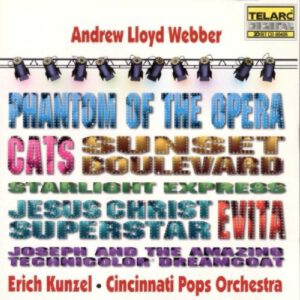 Not unlike the 1990 Symphonic Pictures release, this was a “pops” orchestra’s attempt at relevance. The artist, in this case, was Maestro Erich Kunzel and the Cincinnati Pops. The late Maestro Max Rudolf invited Mr. Kunzel, then a young conductor on the faculty of Brown University, to join the Cincinnati Symphony Orchestra as an associate conductor in 1965. That October Maestro Kunzel conducted his first sold-out “8 O’Clock Pops” concert, marking his ascent as a modern orchestral legend. The Cincinnati Pops, part of the Cincinnati Symphony, was then officially founded in 1977 with Maestro Kunzel at the helm. For decades he led the orchestra, packing houses in Cincinnati’s Music Hall and Riverbend Music Center, and also gaining new fans the world over through tour performances (including many concerts in Carnegie Hall, Radio City Music Hall, and at the Blossom Music Festival and numerous international dates, such as a celebrated tour to China in 2005), PBS television specials, and millions of copies — of 90 albums, since 1977 — sold on the Telarc label. (More than 55 of them made the Billboard Top 10.)

The program, focused of course on the compositions of Andrew Lloyd Webber, takes in seven of his biggest hits: a fine showing for The Phantom of the Opera, mini-suites for Sunset Boulevard and JCS, and a number apiece from Joseph, Evita, Cats, and Starlight Express. The arrangements overall are tastefully done and faithful, but not without creativity. Witness “Don’t Cry for Me Argentina” seguing unexpectedly from its lush, Spanish feel to a touch of Ravel’s “Bolero,” or “Any Dream Will Do” taking on a theme-and-variations approach that sees the familiar melody veer from ballroom waltz to jazz, to Magnificent Seven-style scoring, to a peculiar circus style.

Where JCS is concerned, it’s nothing revolutionary. The songs were intelligently chosen to reflect the opera’s contrasting and conflicting moods, from unrequited, undefined love (“…Love Him”) to sheer anguish (“Gethsemane”). If you’re the kind of fan who will buy any recording for just three songs from their favorite, this one’s unquestionably for you.