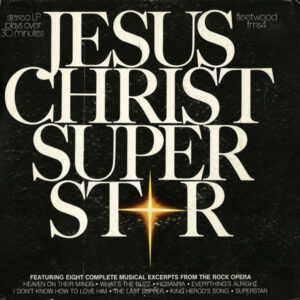 The version the JCS Zone community now has (embedded above) is owed entirely to the efforts of JCS super-fan Mark Jabara, who designed the alternate cover to the left in the early days of JCS downloads and went to great lengths to convert this old, rare EP to digital, playing his copy “in the worst possible shape (including warped)” “wet with a solution that stops vibration and with weights on the pickup,” followed by “6 months with a digital mixer, and removal of all scratches by hand.” Thanks, Mark, for this, and many other valuable contributions!

Side 1:
Heaven On Their Minds
What’s The Buzz
Everything’s Alright
Hosanna

Side 2:
I Don’t Know How To Love Him
The Last Supper
King Herod’s Song
Jesus Christ, Superstar

When any show is a hit, a lot of people will be quick to capitalize on the show’s success. In this case, Jesus Christ Superstar was one of the first albums of its kind, and everyone wanted their slice of the pie where the Passion According to Tim and Andrew was concerned. At this time, many “budget” labels famous for releasing low-cost sound-alike albums (“knock-off” recordings capitalizing on shows, songs, or albums that became hits) jumped into the fray. The performers were usually never an actual ensemble that had performed JCS (indeed, in its early days, the number of actual casts performing the show was very few), but instead merely a group of vocalists who recorded songs from the show. Usually, these recordings were very cheaply put together and produced, and priced to own. (In the future, albums like these, now labeled “studio cast recordings,” could no longer be accurately described as simple cash grabs, but at the time, the use of the phrase “knock-off” is appropriate.)

Though it may be a matter of opinion, this particular fan feels that since the performers on these studio recordings lack the experience of getting on a stage and performing the show in front of an audience, the performances are pleasant enough, but not always up to par with a real cast album. This case is one of the more obscure recordings from the early Seventies. The exact year of release is uncertain (currently estimated at 1971 thanks to the help of CastAlbums.org), but Tim Rice reportedly once mentioned that it was one of the first such recordings to appear outside the UK after the original concept album was released.

Often, such recordings were graced with faux-sophisticated liner notes that attempted to add an air of authenticity to the proceedings. This one was no different, managing to talk up both their version of JCS and the particular technology they were debuting with this release:

Two unrelated but equally significant achievements occurred in the recording arts and sciences during 1971.

In the first instance a monumental accomplishment a “rock-opera” prepared with great insight into contemporary religious and social consciousness. Deftly produced with the passion of today’s youth the work was offered to the International (sic) public. Almost from its first playing a clamor arose, even if sometimes controversial, catapulting Jesus Christ Superstar to a pinnacle seldom reached. While Superstar flourished in the marketplace quiet, unobtrusive scientific experiments were being carried on in a studio outside Boston, Massachusetts. The results of those experiments represent a major breakthrough in the recording industry.

The birth of the 7″ microsonic process record album was announced.

The immensity of this new concept is not yet comprehensible but it will almost surely revolutionize the industry.

A full lp on a 7 inch disc! Not bits and pieces. It is a full long playing stereo album equal in playing time and sound to what is commonly called the standard size lp. There is no gimmickery (sic) involved and no gadgetry required. This brand-new 7″ album will play on any standard phonograph player.

It is fitting, then, that to introduce this new microsonic process, Fleetwood records has united the two most significant concepts ever to simultaneously emerge from the recording industry.

This is a totally new sound of Jesus Christ Superstar (a modern day reflection on the passion and crucifixion of Christ) in the totally new microsonic process, together bringing forth the most exciting sounds of the 70’s.

Unfortunately, history does not record how this exciting innovation in vinyl technology fared, but the recording itself still exists as a minor slice of JCS history.