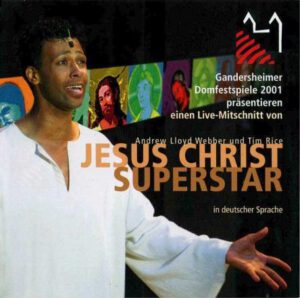 The CD was produced with the kind permission of all involved and Verlags Felix Bloch Erben, Berlin. All copyrights and ancillary copyrights reserved. No unauthorized duplication, rental, performance, or broadcast!

This production of Jesus Christ Superstar received support from the Government’s Cultural Affairs and Media Commissioner.

Jesus Christ Superstar has developed a rich history of European production in the late 20th and early 21st centuries. For some unknown reason, it’s especially popular in Germany, usually in its original tongue, though the native translation, while reportedly not the best, is what gets an airing this time around, in a live recording reflecting a presentation during the 2001 season of the Gandersheimer Domfestspiele.

An annual (since 1959) summer theater festival in Bad Gandersheim, Germany, the Domfestspiele makes its home in a thousand-seat “in the round” venue outside the Romanesque cathedral at the city’s center, rightfully renowned as Lower Saxony’s largest open-air theatre. Performances attract up to 60,000 spectators per season, with diverse programming serving all ages and demographics, from children’s fare to “adult” straight plays and musicals.

The production, “by arrangement with Robert Stigwood” per the CD’s liner notes (this credit would persist for some time long after his hold on the show had lapsed, and is not necessarily an indicator of Stigwood’s actual involvement), was directed and choreographed by Götz Hellriegel, who would go on to stage JCS again for the touring repertoire of the Landestheater Detmold, assisted by Monika Fieber (directing) and Karen Probst (choreography), with set and costume design by Gerd Friedrich and dramaturgy by Andreas Lübbers.

As with the 2000 Remscheid recording, alongside stunt casting (in the form of the Berlin Comedian Harmonists’ Rolf Randolph as Caiaphas), this production proved a breeding ground for future frequent JCS performers on the European scene. Among others, Mischa Mang would reprise his performance as Judas several times (at Opernhaus Chemnitz [2003], Burgfestspiele Jagsthausen [2005], Thunerseespiele [2009], in Vienna [opposite fellow repeat visitor Drew Sarich], and Tecklenburg [both 2011], Zwingenberg [2015], and Schwäbisch Hall [2016]) as well as playing Simon in a 2003 production in Eggenfelden, and Randy Diamond (Herod here) played the title role in productions in Braunschweig, Innsbruck, Kaiserslautern, and Leipzig.