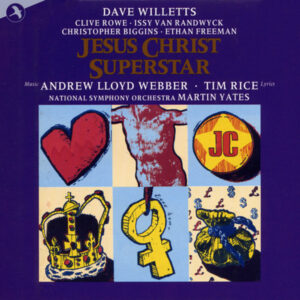 JAY Records (a London-based subsidiary of That’s Entertainment Records International Ltd., which represents the recordings of TER, JAY Records, and JAY Productions, and sells its music worldwide under the JAY and TER imprints) has specialized in recording West End and Broadway shows and artists for over a quarter of a century in the highest audio quality. Their catalog’s range is extensive, covering everything from film soundtracks to musical theater. One of their most popular lines, however, is the Masterworks Edition, which they define as “full-length recordings using original orchestrations and full orchestras just as the composers originally intended.” (Your mileage may vary; while they are generally useful for their completeness, cast wise the recordings are usually solid readings of the classics but nothing extraordinary.) As musical theater pieces in general rarely get such true and lavish treatment, in theory, one should be grateful that JAY decided to tackle a Masterworks Edition of JCS during its early Nineties resurgence of popularity. That is until one listens to it.

The liner notes boast that “[t]his landmark of British musicals has been reproduced in its original full symphonic conception which is often sadly lost on stage due to restrictive orchestra size. In this recording, the 60-piece orchestrations with added Digital Dolby Surround depth offer the listener a definitive recording of this classic work.” Well, whatever the technical quality of the recording, they could have tried upping the rhythm quotient in the music department; even in Andrew Lloyd Webber’s later precision-honed revivals, this reviewer has never heard another recording of the score in which the “rock” in “rock opera” was so watered-down (practically to the level of flat-lining), with the orchestra — a resident ensemble and conductor used on many JAY recordings of the era — seeming to treat the piece as though they were recording My Fair Lady. Still, it’s noteworthy for including an instrumental “tag” at the end of “The Temple” which only appeared in early stage productions, and for the bemusing version of “Could We Start Again Please?” tacked on at the end as an appendix/bonus track.

As far as the cast goes, “one-note” is generally the order of the day. We’ll consider this piece by piece. First, the recording boasts “a fascinating ‘battle’ of the Phantoms between Dave Willetts (Jesus Christ) and Ethan Freeman (Pilate) both of whom played the Phantom on the West End stage and elsewhere.”

In comparing the two, Willetts frankly sounds like he’s still playing the Phantom on this recording; when attempting to find one word to describe his performance, “angry” easily comes to mind. He snarls through the role of Christ, seemingly raging at everybody in the immediate vicinity and coming off as more evil than any of the priests (all of whom lack power and punch) with his darker sound, and when he tries to show that he’s capable of rocking out, it results in embarrassingly painful vocal ad-libs and appalling overacting. Memo to all theater performers cast in rock/pop musicals: shouting “YEAAAAAH!” wherever you can isn’t going to fool people into thinking you’re any more authentic. Even when he makes a genuine acting choice, such “innovation” as “I’ll show you how to die” in “Gethsemane” is outright laughable and arguably more blasphemous to traditional Christians than anything that’s part of the script in JCS. (In fairness, having heard Willetts’ live performance as a replacement on the Paul Nicholas tour that spawned the 20th anniversary London cast recording, he doesn’t seem to hold back as much as on the album, where he seemed to completely lack power, and sounds a lot better. One wonders what happened in the studio.)

Switching gears to Ethan Freeman, while the role of Pilate is generally one where this reviewer considers the acting more important than singing, he certainly comes off better than his fellow Phantom, turning in a fine performance indeed and almost certainly walking away as the highlight of the album. His portrayal sounds genuine, and while he does seem to have some issues near the end of the Trial sequence, he still does a solid job.

About the other leads:

If you’re the rare JCS fan who also enjoys the sound of large orchestras more than rock instruments, you’ll probably like this album. But by and large, this reviewer would recommend only purchasing the album if one is a completist.