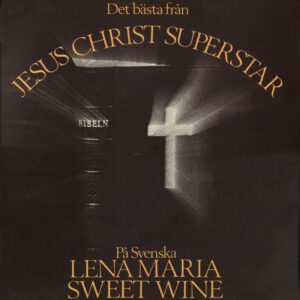 This recording, a pretty funky rendition by a Swedish group whose lead vocalist, Lena-Maria, had had success in various groups and went on to sing backup for several noted Swedish artists, including ABBA (which association led to her appearing in ABBA: The Movie), is, like the French Barclay recording before it, an example of a phenomenon which will recur frequently in the history of JCS: namely, the “chicken or egg: which came first?” situation. Like the Barclay recording, Lena-Maria & Sweet Wine used translated lyrics by Britt G. Hallqvist which also appeared in the Swedish stage production, drummer Lars Liljeryd refers on his website to the group having toured Sweden with JCS in 1972 (whether to promote this record or as part of the actual production is unclear) though “none [of them] was particularly religious,” and, as in the case of the Barclay recording, not only is its association with any production unclear but whether or not this recording pre-dated the official Swedish run.

At any rate, while this little album seems to have been a footnote in the careers of all concerned, it is nonetheless a part of JCS history like all other recordings of its type, and as such, its presence here is well-warranted.