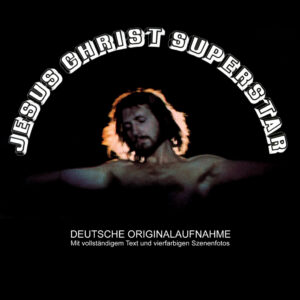 Recorded at Studio Cornet (Junkersdorf near Cologne) on 8 and 16-track tape.

Let us set the scene: it is now 1973. A couple of years ago, Jesus Christ Superstar reached Broadway as a spectacular, flamboyant, over-the-top, eye-popping extravaganza. And neither the critics nor Tim Rice and Andrew Lloyd Webber were won over by director Tom O’Horgan’s outrageous sensory-assaulting production. In later years, writing program notes for a revival, Webber would opine, “Looking back 25 years later, I suppose there were pluses. Because the production was so awful, no production of Superstar in the rest of the world was the same, so I had a baptism of fire by a kaleidoscopic gaggle of directors.” As Rice described the same period in his autobiography, “…it was extremely useful for us all to see other ways it could be done […] Because of the general lack of confidence in the O’Horgan version, all of these were brand new productions, and none bore any resemblance to the Broadway show.”

In Germany, things tended toward the concert-like route. Der Spiegel proclaimed “There’s no Jesus like Show Jesus” in its August 1972 issue when they interviewed producers Lars Schmidt (My Fair Lady) — who also directed — and Karl Buchmann (a promoter of German ice shows) in the lead-up to the premiere. Turning their back on conventional theatrical venues, they announced plans to tour JCS to bigger arenas, including sports and concert stadiums, proclaiming that “they simply have the appropriate dimension for the event.” The premiere in Münster promised to be as big as the Bayreuth Opera Festival, boasting a cast of 50 and taking place in a mobile touring arena with a cruciform 30 x 22-meter stage, 110 lights, and a hydraulic lift allowing Jesus to take leave of all earthly things at show’s end. Grandiose? Perhaps, but then this is the same Germany that has allowed a later Webber piece, the equally grandiose mega-musical Starlight Express, to run successfully in a custom-built venue in Bochum since 1988.

There wasn’t a slouch to be found in the creative team either, boasting choreographer Lester Wilson (later of Saturday Night Fever and Sister Act fame, and future choreographer for such artists as Billy Crystal, Diana Ross, Dalida, Gladys Knight, Ann-Margret, and Liza Minnelli), costume designs by Tom C. Keogh (a New York-based internationally renowned fashion illustrator, graphic artist, and set and costume designer, famously married to Teddy Roosevelt’s dancer-novelist daughter, Theodora), and renowned Hamburg-based jazz kapellmeister Rolf Kühn heading the music department. Featured in the chorus were members of Botho-Lucas-Chor, one of the most famous German vocal ensembles of the Sixties and Seventies, and the rock band hired for the production (a la Randall’s Island on Broadway, and The Travis-Justis Group on an early U.S. tour) was Emergency, a jazz/prog rock fusion group signed to CBS and founded by Czech musician Hanus Berka that incorporated elements of blues and soul into their oeuvre.

Tim Rice’s autobiography only briefly comments on this imaginative production: “The German show we attended was staged in a huge ice-rink in Münster, and was more of a concert version which was to tour Germany at similar venues for over a year in its first incarnation. The Thirty-Nine lashes scene went down so well in Deutschland that Pilate nearly made it to Seventy-Eight.”

Of minor — but not unimportant — note is that Anja Hauptmann’s German translation, heard in this (mostly) complete recording, is rarely if ever heard onstage in German-speaking countries today. German fans who have occasionally posted on JCS Zone’s forums have reported that this is because the translation is so ghastly of quality that most German promoters opt instead to simply present the English version, over half of Germany (and other German-speaking countries) being familiar enough with the language to understand JCS in its native tongue.