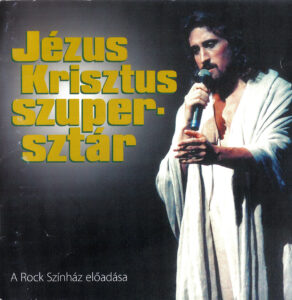 Recorded in 1986 at Főnix Stúdióban

Though this recording marks the official Hungarian premiere of Jesus Christ Superstar, its stage origins actually lie much earlier in the timeline. In the early Seventies, at a time when the concept album had just come out and the Broadway production had only been running a short while, a Hungarian adaptation of JCS took its first breath behind the Iron Curtain when an intrepid group of students decided they wanted to mount a home-grown version of the piece.

Based on the original studio version, the band and orchestra parts were transcribed and reduced for a five-piece rock band, specifically a group called Korong, which not only played the music but lent its vocalists (along with other pop singers) to the cast. Miklós Tibor, one of the band’s resident songwriters, adapted Tim Rice’s words into Hungarian.

Premiering as an oratorio in mid-January 1972 at the “E” building of Budapesti Műszaki és Gazdaságtudományi Egyetem (BME), this early production played a series of successful performances at university clubs around Budapest before the local Communist authorities intervened (in spite of praise and support for the production from renowned Hungarian artists and public figures). Western entertainment was verboten in the Eastern bloc, and on top of that, it was a rock opera about Jesus being presented in an officially atheistic state, which led to the production being slapped with a ban for “distribution of religious propaganda.”

It would later be argued from many corners, including Tibor’s, that this early — technically illegal — production sowed the seeds for the eventual growth of Rock Színház, a theater company founded in 1980 which revitalized Hungarian theater with its presentations of many of the world’s biggest contemporary musicals as well as original Hungarian material. In July 1986, it was Rock Színház that mounted this new outdoor production of JCS, utilizing Tibor’s translation and under the direction of Szikora János, at the Szegedi Szabadtéri Játékok, Hungary’s largest open-air venue.

The recording consists only of highlights, and there are times when, much like the Swedish revival of 1985, the recording betrays its Eighties origin in the synth-heavy arrangements, but overall, it’s really quite good. Makrai Pál in particular, despite lacking the soul inflections that other performers have given the role, gives a terrific Judas.