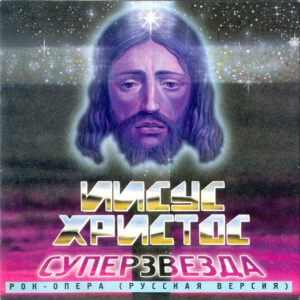 Recorded at the GDRZ Studio, Moscow

As discussed on the page for Soviet jazz/rock band Arsenal’s album which featured highlights from the score, Jesus Christ Superstar had a tough road behind the Iron Curtain from the day it began. While JCS is one of the most famous examples of rock opera, and left an enormous impact at the beginning of the Seventies, everywhere else, it was received much differently in the USSR. For one thing, the Eastern bloc viewed it differently from the West for political reasons: in the country where communism reigned triumphantly, a musical based on the last days of the founder of Christianity did not blend well with official atheistic ideology. (Ironically enough, while JCS was popular in the West because religious authorities from the Catholic Church on down passed judgment on it for its “blasphemous” views, it was “alternative” and a novelty to Russian audiences purely because it dealt with a religious subject, to begin with.) For another, rock music was verboten by the local authority for being a corrupt Western influence.

The earliest seems to have been lost to the sands of time: per a biography, the late blues-rock singer/songwriter Mike Naumenko, who led the group Zoopark, one of the earliest examples of Soviet rock, reportedly played the original recording for his grandmother and translated the lyrics for her so they could discuss the piece more fully. This translation no longer exists, if it was ever preserved, to begin with.

The first theatrical presentation of the piece came from Teatr Im Mossoveta in 1990, performing a translation by Yaroslav Kesler that scarcely adhered to the original. Scenes were expanded, and newly written, to Webber’s melodies, incorporating material from the “novel within the novel” in Bulgakov’s Russian classic, The Master and Margarita. What was there already was massaged to more closely resemble the New Testament. (Example: a rendition of the Beatitudes is inserted following the Overture, and the apostles’ fierce disagreement with Jesus in “Strange Thing, Mystifying” — “No you’re wrong, you’re very wrong!” — instead becomes a fervent declaration of love and belief in him.) Though the music was close to the original from the viewpoint of arrangements and orchestrations, the very loose adaptation easily drew ire from some critics, with Petr Tiulenev declaring, “Mossovet’s staging of Superstar is worse than the Western original from an artistic point of view and its spirit does not correspond to it at all.”

Thankfully, help was on the way. In 1992 came this effort, with a new translation by renowned poet Vyacheslav Ptitsyn, a massive JCS fan who fought hard to get this project rolling. By comparison to the Mossoveta production, this was an incredibly faithful rendition. Recalled Sergey Minaev, who played Judas, “The translation greatly surprised me; I reread it often over the next few days, unable to believe my eyes. The meaning and the rhythm were fully preserved. Every word was the same in Russian as in English.” A close examination reveals that Ptitsyn not only preserved the rhythm, but many of Tim Rice’s original rhymes, only slightly varying the text in places and avoiding the custom (typical of foreign translators) of inserting rhymes where they didn’t exist in the original. Its one shortcoming may be that Ptitsyn opted to use what one critic calls “very high Russian,” incorporating a plethora of archaic words and expressions that slightly worked against the original intent of presenting Jesus’ human side in contemporary language.

From a musical (arrangements and orchestrations) standpoint, the sound is weaker than Mossoveta’s, erring more on the side of pop, but the cast is appropriately packed with Russian music celebs, including the aforementioned Sergey Minaev (Judas; outside of JCS, he had a full-fledged career as a Russian interpreter of many popular European hits of the Eighties and Nineties), Mikhail Seryshev (Jesus; in addition to his operatic background, he sang with such noteworthy Soviet rock/metal groups as Rush-hour and Master), Tatiana Antsiferova (Mary; a popular solo artist), Nikolai Arutyunov (Caiaphas; former lead singer for Blues League), Valery Kipelov (Simon; lead vocalist of Aria), Evgeny Margulis (Herod; former guitarist/vocalist for Time Machine), and more.

It’s well worth the listen for Russian JCS fans!