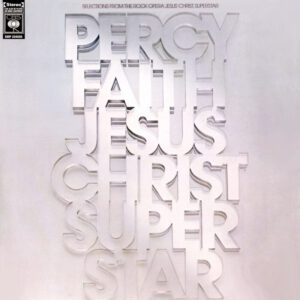 Side 2:
Pilate’s Dream
The Temple
I Don’t Know How To Love Him
Gethsemane (I Only Want To Say)
The Trial Before Pilate
Superstar (Reprise)

In the case of this recording, Canadian bandleader/composer/orchestrator/conductor Percy Faith, noted for his lush arrangements of pop and Christmas standards and often credited with popularizing the “easy listening”/”mood music” format, got in on the act. The selections from JCS featured here are given the typical Percy Faith treatment: a big, big orchestra, string-laden in a sort of Western soundtrack style, but also with big rhythm and jazzy brass. Nobody sings a note of the score; this is all instrumental. The first ten minutes of the album are its defining moment, as drums and brass make a joyful noise ripping through “Superstar,” “Heaven On Their Minds,” and “What’s The Buzz.” The track selection is good, and things are rounded off beautifully with a second stomping go at “Superstar.” Well worth the listen for the seasoned fan.