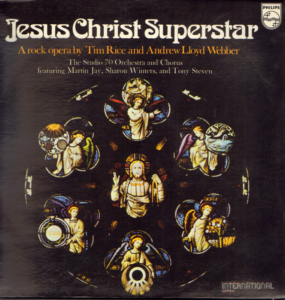 Don’t let the opening drum roll deceive you. Though the arrangements are very similar to the Alan Caddy recording, and Martin Jay shows up again (this time in a Jekyll-and-Hyde turn as both Jesus and Judas, showcasing his versatility — and the label’s cheapness — no doubt), this is a different recording. Though popular in fan trading circles now, this was fairly obscure in its day and should only be picked up by a completist, or someone for whom this recording was their first experience of JCS.