(NOTE: Tom, a friend of Drew’s, conducted this interview while Drew was in Les Miserables in the West End, circa 2008. It is true that Drew Sarich did get his start in JCS just before the 21st century, but the vast preponderance of professional productions in which he has appeared in a leading role occurred in the 2000’s. For those confused by British nomenclature, the “sound stage” refers to the sound booth in the theater.) 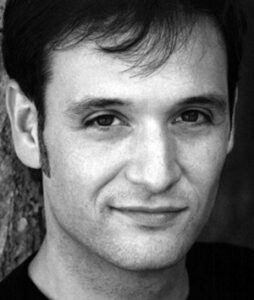 Q. Good, thanks, Drew, how are things?
A. Yeah, just winding down. Are you back again?

Q. Aye, sitting on the sound stage with Rob tonight.
A. You mean you didn’t pay for a ticket?

Q. Sod off it, you should be paying me!
A. Touche.

Q. (Laughs) Look, I’m sorry about the other week. I was a bit twatted.
A. Hey, no worries, man, you were fine.

Q. The missus didn’t think so.
A. She here tonight?

Q. Sure. Look, I don’t mean to bother you, but could you spare a couple of minutes to have a chat about Superstar and get your thoughts?
A. Sure. What do you want to know?

Q. Mind if I record it?
A. Sure. You came prepared!

Q. And stick it on the Internet?
A. Only if I can make you look bad!

Q. Piss off, I can do that myself!

Q. Which was your favorite part, Jesus or Judas?
A. Shit… both, I guess, ’cause they’re such big, big roles, and it’s really hard to choose ’cause there’s so much you can do with each character.

Q. Cop out. Okay, so either role, favorite song?
A. I guess for Judas, “Judas’ Death.” Jesus, “Gethsemane.”

Q. I loved your version of “Superstar” until I saw the video.
A. Why?

Q. Indeed.
A. You would not believe the shit we went through with the director and her “vision” of the Jesus/Judas relationship. Her take was that Jesus was divine and Judas evil, but I’d always gone along with this German theologian called Gerhard Kittel, and his view that Judas and Jesus both had a job — or a role — to fulfill, and Judas couldn’t handle the responsibility of what he had to do and never came to terms with it. It’s almost like Christ saying to him, “I’ve got the easy part, all I have to do is die.” And that’s really what I was trying to get over with that, but it wasn’t the easiest of times!

Q. (Laughs) So I’ve heard on the jungle drums that there’s gonna be a big remake of Superstar in 2010. Do you know anything about it? Involved at all?
A. No, I’ve not heard a thing. What do you know?

Q. Gerard Butler as Pilate?
A. No way! He’s a fucking karaoke singer!

Q. That’s all I’ve heard! But would you be interested?
A. Sure. Who else is in line?

Q. I dunno, maybe you and him could wrestle for Jesus/Judas?
A. Bitch fight more like!

Q. In costume! Get it filmed for the DVD extras…
A. (Laughs)

Q. So when’s Rob coming to London then?
A. I dunno, he’s around Europe at the moment doing Rocky Horror, doing the Frank N. Furter thing. We’ll probably touch base when I’m home next week.

Q. Cool. Speaking of tours, Ted Neeley’s out on the North American tour. Did you hear anything?
A. Yeah. I saw Ted when I was, like, 17, and I’d just played Jesus for the first time, and man, he just blew everyone away, but you got the sense that when he came off stage, he was still right in his “Jesus zone,” you know, laying his hands on people, and I was like, “Ted, come on.”

Q. Still going strong, age 300.
A. Yeah. It’s sad, though, ’cause the guy’s got such an amazing voice, and all he’ll ever be known for is Superstar.

Q. What did you make of Balsamo and his week-long high G?
A. I hate the guy, not ’cause of his voice, but I just hate the arrogance of it and the way that Webber treats his shows with such disdain for the fans. All too often he’s building shows around one actor, and the people he picks just aren’t all that, you know?

Q. Indeed. So what’s the difference between here and Broadway?
A. You mean which one’s better?

Q. Bollocks! I know the truth!
A. (Laughs) Well, what can I say? Everyone here has been charming and I’ll be sorry to go, but I’ve not seen my kids properly for nearly two years.

Q. Seriously?
A. Yeah. But I think the main difference is in the audience and how they react to you. In New York, they are much more giving and forgiving of you, whereas here I think you have to work a little harder. Especially if you get a theater full of people who know the show backward, and they are always the first ones to say what you did wrong or what they didn’t like. But generally, if it’s people’s first time seeing the show, they are so kind, and I guess the fans aren’t all that bad! But it’s change that upsets people.

Q. Well, more of a criticism from the missus. You can sound very American, and maybe sometimes it’s hard for people to get over that.
A. Okay, Tom, answer me this: we’re in Paris, it’s the mid-19th century, and they’re all Cockneys? “Apples and pears, apples and pears…” (Does a silly Cockney dance)

Q. Pillock. How well-known do you think you were before you came here?
A. Well I don’t know. There’s been a couple of people who’ve seen things on YouTube and the like.

Q. God bless the Internet!
A. Indeed. It’s amazing what’s out there, and that people are sharing things that are enriching people’s lives.

Q. And record collections!
A. True, but people are always gonna bootleg. Hell, Metallica even encourages it!

A. Are you recording tonight?

Q. Nah, I asked Rob and he said he’d lose his job.
A. Fair enough. Hey, look, man, I’ve gotta go warm up, are you coming to the Helms afterward?

Q. Sure. I’m off the sauce, though.
A. You are such a little girl with pigtails.

Postscript from the Interviewer

“[That night in Les Mis] at the line “…Took the silver took my fliiiiight!” I want you to guess how high that fucker went.”