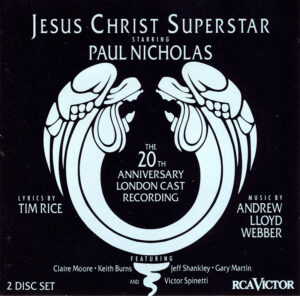 Credited to The Stephen Hill Orchestra

“Could We Start Again Please?”
Featuring Paul Nicholas and Claire Moore
With new additional lyrics by Tim Rice, 1992
Recorded at Ripe Studios and produced and arranged by Mike Moran

At one point or another, everybody is nostalgic for the decade in which they came of age. Every surviving member of each nostalgic decade has something to miss: music, TV shows, Saturday morning cartoons, hanging out with your friends at the skating rink or the mall or over an egg cream at the drugstore (choose your nostalgic junket). And, on average, the big waves of nostalgia take about 15-25 years to get going.

In the UK, this was marked by a concert production celebrating the twentieth anniversary of the original London run. In 1990, while starring with David Ian in the New York Shakespeare Festival version of the popular Gilbert & Sullivan opera The Pirates of Penzance at the London Palladium, Paul Nicholas, who had played Jesus in the initial London company of JCS and went on to become quite a big name through many stage, film, and television roles (as well as a brief pop solo career), offered Ian a partnership in co-producing and starring in a touring production of Pirates. To that end, Paul Nicholas & David Ian Associates Ltd. was formed. But in order to mount a fully staged version of Pirates, they needed money, and fast. It was decided to round up some London JCS veterans (Victor Spinetti, Jeff Shankley, Bogdan Kominowski, etc., many of whom were replacements in the original company), pair them up with rising West End stars (Claire Moore, Keith Burns, etc.), have Nicholas reprise the title role as the main attraction, and mount a UK anniversary tour of JCS, staged as a concert spectacular by director Hugh Wooldridge. Their gambit paid off — the show played to packed audiences all over the country, eventually running long enough to take on replacements, including Dave Willetts in the title role, about which more will be heard later in this Discography.

Many JCS fans are down on this recording, and for good reason, but for this reviewer, the positives outweigh the negatives, at least when it comes to the cast. In his return to the role of Jesus, Paul Nicholas is much better than the first go-round, in which it was all too clear that while he may have been a pop/rock singer, he was too different a type for the role; 20 years later, he still lacks the high notes, but makes up for it with a mature, believable performance that is especially haunting in quieter, gloomy segments like “Poor Jerusalem” and the crucifixion sequence. Apart from Ted Neeley’s later performances, it’s arguable that Nicholas conveys the “sad and tired” side of Jesus better here than most who have essayed the role elsewhere. Keith Burns (Judas) is no Murray Head, Ben Vereen, or Carl Anderson — he’s not up there with the greats, and the range isn’t always comfortable for him — but he hits all the notes and brings passion on the acting side to make up for being less than exceptional. Claire Moore, never one to disappoint, turns in a solid Mary. But the real stars of this recording are the supporting players: Jeff Shankley delivers an inspired singing and acting performance as Pilate (his slow, moody performance of “Pilate’s Dream” in particular is close to definitive), Victor Spinetti gives us a surprisingly non-campy Herod, Gary Martin and Bogdan Kominowski are a deliciously villainous pair in the roles of Caiaphas and Annas, and Christopher Howard performs what some consider the ultimate rendition of “Simon Zealotes.” (If he and Keith Burns had switched roles, this recording would be so much more interesting, just sayin’.)

In terms of sound quality, things are a tad too polite in the mixing and mastering — one really has to crank the volume to get a decent sound from the album. Mistakes are also present in the final recording that should have been fixed before release, such as a repeated “22” in the counting of the 39 lashes (presumably dropped in when “23” was accidentally erased; one can’t imagine actor error being left on the tape). Further, some segments of songs are inexplicably — and, it seems, rather arbitrarily — broken up into their own tracks, for example Jesus and Judas’ fight during “The Last Supper” being rendered separately as “Argument.” It’s more than slightly odd, and smacks of trying to trick the naive buyer into believing it’s a new version of the show.

Musically speaking, the orchestra has some really fine moments (“Pilate’s Dream,” again, is a good reference point), but while the original orchestrations are happily replicated here, the arrangements are, for the most part, too weak. (“Heaven On Their Minds” is a good example.) The use of a children’s choir during the “Overture” and “Superstar,” however, is an inspired touch, and the apostles’ final verse in “The Last Supper” is performed against type to interesting dramatic effect; rather than sung drunkenly, it is rendered beautifully, sung as if a stirring memory backed by a sublime piano, which leads into a rendition of “Gethsemane” that starts quite subtly before the orchestra kicks in proper.

About the only track that completely misses the boat is “Could We Start Again Please?” which was treated — both live and on the album — as a bonus track outside the context of the show, an obvious attempt at chart bait with a cheesy, ubiquitous, “early Nineties pop single” arrangement. Tim Rice’s added new lyrics are no improvement on the originals and initially make zero sense in the show’s context, though some productions over the years since (including a major 2000 production in Manila) have opted to use them and a few (such as an amateur production by the Avondale Theatre Company in 2012) have actually managed to make them fit. In the case of the 20th anniversary cast, however, they’d have done just as well burying it at its proper spot in the show, or better yet leaving it out altogether, as no one really misses the song when the show is restored to its original concept sequence with Herod followed by “Judas’ Death.”

For many posters at the JCS Zone forums, this album was, for one reason or another, their introduction to the show, so it will always hold a special place in their hearts regardless of its objective quality. At the end of the day, this album has its pluses and minuses like any other recording, but is really quite a fine addition to any JCS collection.