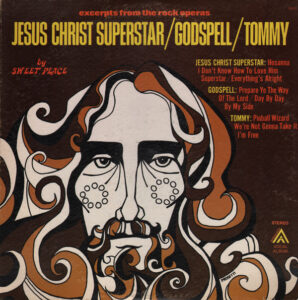 Godspell:
Prepare Ye The Way Of The Lord
Day By Day
By My Side

This effort appears to have been the result of an attempt by Ambassador Records (a “budget” subsidiary of the Synthetic Plastics Company of Newark, New Jersey, which formed in the late 1920s as a plastic manufacturer of buttons for the garments industry and game parts for the toy industry and diversified following World War II) to join in on the trend of budget rock opera “knock-offs.” Not content to stop at JCS, this particular release also offers highlights from the scores of The Who’s Tommy and Godspell, which one might recognize as that other Seventies rock musical take on the life of Christ.

Not much is known about this particular release. What little we know of the group who performed it, Sweet Peace, is derived from the album’s back cover, which includes liner notes that read as follows:

Sweet Peace, the rock group performing on this album, have been performing for 2 years and have toured most of the country. They come from a town called Storm Lake, Iowa and grew up close to nature and close to God. They are right on today’s music, as is witnessed by their terrific arrangements and sound.

To twist a lyric from the show, this album “seems to me a strange thing, mystifying…”