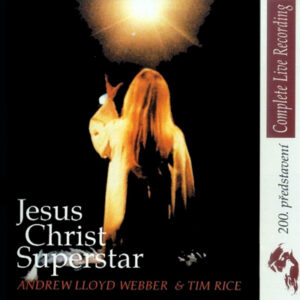 NOTE: This is the cast as of recording (the show’s 200th performance), not necessarily the cast for the length of the show’s run. Also, the recording’s liner notes include a complete listing of alternates and/or understudies for many of the roles; as they were deemed superfluous to requirement, they have not been included here, but can be accessed by clicking “More Images” at this recording’s Discogs entry.

NOTE: This is the orchestra as of recording (the show’s 200th performance), not necessarily the orchestra for the length of the show’s run. Also, the recording’s liner notes include a complete listing of alternates for many of the orchestra seats; as they were deemed superfluous to requirement, they have not been included here, but can be accessed by clicking “More Images” at this recording’s Discogs entry.

In the early Nineties, there were still parts of the world where Jesus Christ Superstar had yet to make a dent in foreign language adaptations. One such area was the Czech Republic, at least until the wheels began to turn on the first Czech JCS in 1993. Director Petr Novotný, actor Stanislav Aubrecht, and lighting designer Jozef Celder, who first met working on the Czech premiere of Les Misérables a year earlier, formed a production company called Musical s.r.o. to bring more current popular material to their home country. Their initial plan was to present another Andrew Lloyd Webber musical altogether, Cats, but after protracted negotiation failed to produce results (the show would finally have its Czech premiere a decade later), they instead obtained the rights to JCS in December 1993.

Upon its opening in the summer of 1994, it met with much critical and commercial success and was ultimately seen by over 850,000 people for 1,288 performances before it finally closed on June 28, 1998. This production was documented twice: a studio recording of edited highlights, which saw its release following the August 17, 1994 evening performance, and a complete live recording of the 200th performance on February 19, 1995. It is to the latter which we now direct our attention.

By the time of recording, the Czech production of JCS had been winning much-deserved accolades from many of its industry peers; the show itself won Gramy Awards (later renamed the Anděl Awards, from 1992-96 they called themselves the Gramys and operated much like its successful English equivalent, the Grammys, complete with the award incorporating a ceramic statuette of a gramophone) for Concert of the Year, Event of the Year, and Highlight of the Year, Dan Bárta was nominated for a Thálie Award in musical theater and won the Male Vocalist of the Year Gramy (edging out cast-mate and fellow nominee Kamil Střihavka), Bára Basiková was nominated for a Female Vocalist of the Year Gramy, and translator Michael Prostějovský was honored for his efforts in adapting Tim Rice’s lyrics by the CEO of Czech Radio with the coveted Prix Bohemia of 1994. As such, it was a foregone conclusion that the already extant highlights recording simply would not do. This huge success had to see a fuller representation.

Unlike the almost-but-not-quite-complete studio recording, this is the whole show, with all of the cast in the roles they would normally have portrayed onstage. Very much like the studio recording, the orchestrations are unusually excellent (this particular lineup of musicians includes instruments that this reviewer had not noted on a cast album since early recordings), and the performers are uniformly strong; special mention must be made in particular of Kamil Střihavka and Dan Bárta as Jesus and Judas, respectively. Their chemistry is obvious and the quality rock sound of their voices is incredible, heard to much better effect here than on the studio recording. Many around JCS Zone rank Kamil and Dan among their all-time favorites, and this recording shows it is for good reason. Indeed, the site’s founder, Jay, once went so far as to proclaim this cast “without a doubt, one of the, if not the, best casts of Superstar in a foreign language.” Don’t believe him? In the words of a one-time Eurovision contender by Tim Rice and Andrew Lloyd Webber that ultimately became a song for King Herod, “Try it and see.”

The best cast of Superstar in a foreign language!

Many have praised this cast and I’m sure a lot of you are already familiar with this recording and for good reasons! This is without a doubt one of the, if not THE best cast of Superstar in a foreign language. Kamil Strihavka and Daniel Barta are among my all time favorites and it’s not difficult to see why. There’s an obvious great chemistry between these two and both have incredible rock voices! Add to that the excellent orchestrations and fellow cast members, all who are more than good and you’ve got yourself a true cast of Superstars!