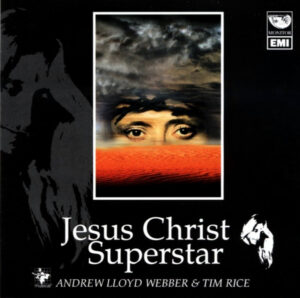 Asterisk (*) indicates that these tracks only appear on the 2010 re-release.

In the early Nineties, there were still parts of the world where Jesus Christ Superstar had yet to make a dent in foreign language adaptations. One such area was the Czech Republic, at least until the wheels began to turn on the first Czech JCS in 1993. Director Petr Novotný, actor Stanislav Aubrecht, and lighting designer Jozef Celder, who first met working on the Czech premiere of Les Misérables a year earlier, formed a production company called Musical s.r.o. to bring more current popular material to their home country. Their initial plan was to present another Andrew Lloyd Webber musical altogether, Cats, but after protracted negotiation failed to produce results (the show would finally have its Czech premiere a decade later), they instead obtained the rights to JCS in December 1993. After Michael Prostějovský completed his translation, auditions were held in mid-January 1994. Rehearsals began four months later at the Hudebního divadla Karlín, a venue just outside Karlín which had been presenting musicals in the area since the late Forties.

Following previews beginning July 19, the show opened on July 22, 1994, at the Spirála Theatre — within the Výstaviště Praha — to critical and commercial success, with high praise for Novotný’s direction, Ivanka Kubicová’s choreography, and the designs of Celder (lighting), Mihail Tchernaev (sets), and Gita Marcolová (costumes). It was ultimately seen by over 850,000 people (among them Vaclav Havel, who took in the 60th performance on September 22; it had already played 100 performances by November 1) over the course of 1,288 performances before it finally closed on June 28, 1998. (It should be noted that the run was not consecutive; after initially closing on July 18, 1997, the musical played a return engagement which opened September 5, 1997 and closed the following summer.) This production was documented on two recordings: this initial studio recording, a highlights version that saw its release following the August 17, 1994 evening performance, and a complete live recording of the 200th performance on February 19, 1995. It is to the former which we now direct our attention.

Of the twenty-four musical numbers that make up JCS, eighteen (nineteen, if one includes the bonus track as a separate song) appear here. The Overture is drastically shortened, but otherwise everything appears much as it was written, albeit in a different language. Some adjustments were also made in the casting department for this recording: Martin Skala, who appears as Simon here, did not play this role in the show proper, instead essaying the part of a Roman soldier and alternating in the part of Jesus with three other performers, and Josef Bohouš, who plays Herod this time around, was merely one of two alternates in the role and not the main performer, who appears on the subsequent live recording.

All that aside, the orchestrations are unusually excellent and the cast is uniformly strong; special mention must be made in particular of Kamil Střihavka and Dan Bárta as Jesus and Judas, respectively. They are heard to better effect on the live recording, but even here, their chemistry is obvious and the quality rock sound of their voices is incredible. Many around JCS Zone rank Kamil and Dan among their all-time favorites, and this recording shows it is for good reason. Indeed, the site’s founder, Jay, once went so far as to proclaim this cast “without a doubt, one of the, if not the, best casts of Superstar in a foreign language.” Don’t believe him? In the words of a one-time Eurovision contender by Tim Rice and Andrew Lloyd Webber that ultimately became a song for King Herod, “Try it and see.”

The best cast of Superstar in a foreign language!

Many have praised this cast and I’m sure a lot of you are already familiar with this recording and for good reasons! This is without a doubt one of the, if not THE best cast of Superstar in a foreign language. Kamil Strihavka and Daniel Barta are among my all time favorites and it’s not difficult to see why. There’s an obvious great chemistry between these two and both have incredible rock voices! Add to that the excellent orchestrations and fellow cast members, all who are more than good and you’ve got yourself a true cast of Superstars!