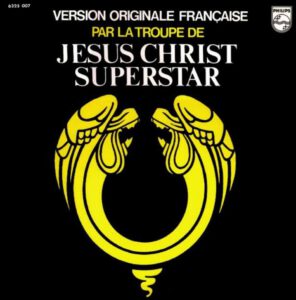 NOTE: This list only represents those known to appear in leading or featured roles.

Let us set the scene: it is now 1972. A year ago, Jesus Christ Superstar had just reached Broadway as a spectacular, flamboyant, over-the-top, eye-popping extravaganza. And neither the critics nor Tim Rice and Andrew Lloyd Webber were won over by director Tom O’Horgan’s outrageous sensory-assaulting production. In later years, writing program notes for a revival, Webber would opine, “Looking back 25 years later, I suppose there were pluses. Because the production was so awful, no production of Superstar in the rest of the world was the same, so I had a baptism of fire by a kaleidoscopic gaggle of directors.” As Rice described the same period in his autobiography, “Robert [Stigwood] had decided that he would not entrust the London show to O’Horgan, and it was extremely useful for us all to see other ways it could be done […] Because of the general lack of confidence in the O’Horgan version, all of these were brand new productions, and none bore any resemblance to the Broadway show.”

In the initial evaluation, Paris looked like a front-runner. It was directed by Victor Spinetti (“the English actor/director,” to give him the shortest shrift possible from Rice’s autobiography; he’s well worth a Google), it was produced by Annie Fargue (a French producer whom Rice describes as “wickedly energetic,” “a dynamic mighty atom,” and incidentally “one of Robert’s closest chums”), and it seemed to have all the right things going for it. To quote Tim: “In Paris the cast had beautiful voices and Victor’s staging was simple, fluid, and sympathetic to the work…” Much like the Australian production, the cast was also a breeding ground for stars: Anne-Marie David (Mary) would win the Eurovision Song Contest that year, while Daniel Beretta would later graduate from Jesus to the similarly unkillable Terminator, going on to become the French voice of Arnold Schwarzenegger in his films. Much like the New York production, the opening night was almost more notorious for its audience than for what was onstage. As Rice recalls, “Salvador Dali stole much of the opening night glory, preening his exotic garb and demeanor with Wildean satisfaction from the most visible box in the house. A brief encounter between Dali and Frankie Howerd was alone worth the price of admission.” (Indeed, Mr. and Mrs. Dali would show such tremendous enthusiasm for JCS that they later took in the New York production, and Mrs. Dali took such a shine to its leading man Jeff Fenholt that she, around fifty years his senior, took him in as well; this affair and obsession [on Gala’s part] would cause Dali much unhappiness during his final years.)

Indeed, the only thing that seems to have held the production back was that it was in the wrong place at the right time. Though “[s]ome of the songs were […] big hits in the French charts, including Petula Clark and Anne-Marie David […] scoring with the French version of ‘I Don’t Know How To Love Him,’” Rice was forced to concede, “I loved the Paris version, but not many Parisians did. The French are not known for their support of musical theatre — even Les Misérables, written by their countrymen, flopped there — and the huge hype that surrounded Victor’s production made the local critics even less disposed to like it. It ran for a few months in the Palais de Chaillot, a (then) modern hall near the Eiffel Tower, but despite all the efforts […] it never caught on.” Even in his autobiography, Rice seems to be attempting to salve the wound; records suggest the show shuttered after only 30 performances, which would have been accomplished in far less than “a few months.” Contemporary accounts further suggest that Godspell, JCS’ folksier cousin (also translated by Pierre Delanoë), beat them in the race for a biblical hit in France, an old-fashioned musical comedy hearkening back to the tradition of Pierrot and other French clowns presumably going down better than a radical rock reinvention.

Producer Annie Fargue, however, was down but not out. Says Rice, “[She] was determined to give Superstar another shot in her hometown and once she knew that the Chaillot version was doomed, set up a smaller concert version in the most famous music hall in the land, the Olympia. This was the Palladium of Paris, the venue in which Edith Piaf most famously carved out her legend. To my astonishment, Annie asked me if I would direct this new pared-down version. No one knew the show better than me, she argued, the casting was already in place, I spoke tolerable French and I would have the chance to spend a few weeks in a city I loved and knew pretty well. In the event, I only needed to be there for around three weeks. I did my best and although I doubt whether Harold Prince and Peter Brook combined could have broken through the Parisian determination to stay away from Superstar in droves, my first and last attempt at directing was fairly enjoyable. […] Speaking French nearly all day did wonders for my Parisian social life, but the Mark Two French Superstar was no more successful than Mark One. Even Annie lost heart after the second failure, but I am very grateful that she tried so hard.”

Ultimately, to hear Tim — and history — tell it, “[i]t was the Australian show, as Robert had suspected, that provided us with the new inspiration for the West End.” But this would not be the last gasp at selling JCS to the French, as we will see on the movie soundtrack page.