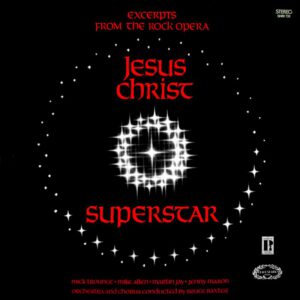 Side 1:
Heaven On Their Minds
Hosanna
Pilate’s Dream
The Temple
Everything’s Alright

Side 2:
I Don’t Know How To Love Him
Damned For All Time
The Last Supper
Gethsemane
Superstar

Side 2:
I Don’t Know How To Love Him
The Last Supper
Gethsemane (I Only Want To Say)
Jesus Christ, Superstar

Side 1:
Heaven On Their Minds
Everything’s Alright
Hosanna
The Temple
Damned For All Time

Side 2:
Pilate’s Dream
I Don’t Know How To Love Him
The Last Supper
Gethsemane
Jesus Christ, Superstar

Side 1:
Heaven On Their Minds
Hosanna
Damned For All Time
The Temple
Everything’s Alright

Side 2:
I Don’t Know How To Love Him
Pilate’s Dream
The Last Supper
Gethsemane
Superstar

Never one to wait very long for the smoke to clear from the cash-in starting pistol, Hallmark (which worked pretty much hand-in-hand with Pickwick) delivered an effort that proves quite interesting and listenable. A small combo and brass (most noteworthy for its well-timed stabs on “Heaven On Their Minds,” but it adds a soulful touch to all of the tracks) ably lay down the backing, as Martin Jay (a veteran of the Kingsway Youth Opera Company recording) gives it a full Gillan when it comes to Jesus’ screams. Quality tracks include an excellently choppy “Damned For All Time,” a great pass at “Superstar,” and a surprising slightly psych-ey and percussion-driven take on “The Temple” that keeps the drama built up by the fuzz guitar riff going throughout the track.